The Old Red Dragon is actually an International 606 tractor that I bought for just under $4000 about twelve years ago.  It's history is unknown, I am not even sure what year it was built.  The most I know of it's origins stem from the mysterious, hand-painted "Oct. 73" scribbled below the seat.  It mostly runs good and does it's job, but it suffers from what most old tractors suffer, which is lots of little problems.  It needs new hydraulic hoses, it leaks various bodily fluids from various places at various times.  I don't worry about anyone stealing it because one has to posses the proper magic wand and know the proper secret spells and incantations to get it started.  Good luck stealing it.  Still, once it's going, it runs well, has lots of power and it's best to just get out of the way and let it do it's job (and I really mean that 'cause the brakes ain't so good).

I had to go to Cortland last week and since it was storming again and I had the time, I stopped at the tractor dealer on the way home.  They were having a big sale and 0% interest for forever and blah, blah, blah...so I stopped to see if it would be worth trying to trade the old beast in.   I told the very nice young sales guy what I had and what I needed a tractor to do and he got a bit morose.  Here's what he told me...

"First, you have to realize that they don't make tractors the way they used to.  I can sell you a tractor that will do the job, but most people who go from these old tractors to the new compact ones, aren't happy.  You're not going to have the power you are used to and it is going to take a long time to get the job done  (I already think this mowing job is excruciatingly slow, boring, tedious, noisy, smelly, etc.).  The smallest tractor that will do what you want, costs about $26,000."

There was a nice used tractor there, but it still had a $16,000 price tag and a used tractor is nearly impossible to get financing for, certainly not at 0% for forever.  I thanked him and told him that maybe I should just put some money into fixing up my poor old tractor.  His response to that was, "You have to be careful there.  Your tractor is worth about $4000, you can spend a bunch of money fixing it up, getting it running as good as it has in 40 years and it will still be worth $4000."

And he is absolutely right, that's what the tractor is worth and what it would be worth.

But....after pondering this sticky logic for a few days now, I come up with something a bit different.  If the value of the Old Red Dragon is measured in what I can buy or sell it for; it is, was, and will be, worth $4000. If it's value is measured in what it would cost to replace it, it is worth about 4 million and I am now a rich woman. 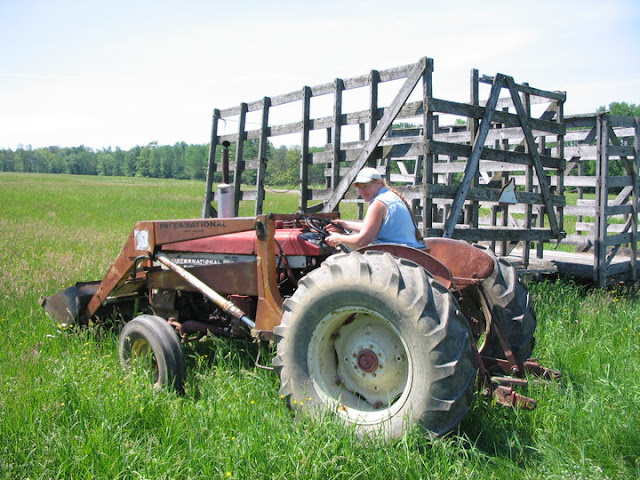 Posted by The Dancing Donkey at 10:06 PM