Last night was the second time that I could not make it all the way to Farm Buddy's place to pick up Tanner.  It was raining so hard and the roads were flooding so bad that by the time I made it to my road at the top of the hill, I didn't dare keep going the extra three miles to get my dog.  It was just as well that I didn't try as the rain slacked off for a moment just after I got home and, in the odd way that sound travels at such times, I heard the fire whistles going off in all the little villages around me and knew that things were really getting bad and the roads were closing.

The town had to use the snow plows this morning to clear the debris off the road that I had to drive through last night.  You know those warnings about not driving through water flowing over a road?  Well, what do you do when going back or stopping is worse than going forward?  Reports today say we got over 4 inches of rain last night.  Enough already!

It was good to come home to find my little herd happily tucked into the barn, all sleeping sound and dry.  They were even happier when I put a new bale of hay into their net so they could spend the rest of the night munching and sleeping through the storm.  I crawled off to my own bed, missing my dog, but content knowing everyone in my little world was safe.  Not everyone was so lucky. 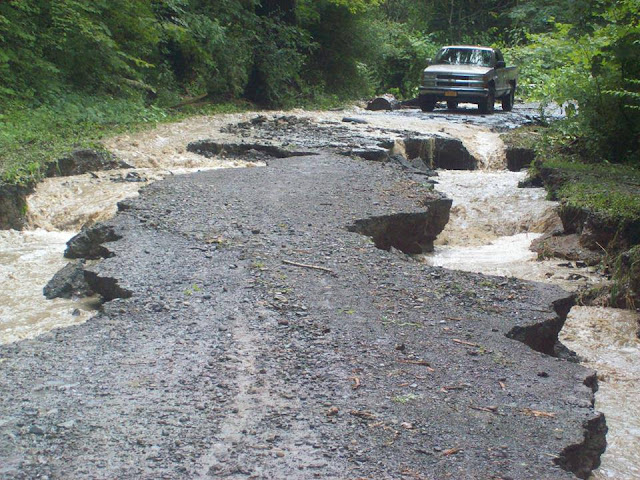 (No, this is not my picture and not my road, but it was taken near here.)

I just didn't have the heart to write about this earlier, but Emma came up lame last week with a hoof abscess.  I took her temperature at the first hint of trouble and kept checking it every few hours.  When it went from her normal 99.7 to 101.1 (which is still considered normal, but is not what Emma's usually is), I put her on antibiotics and Banamine.  This really was just a typical abscess and it popped out of the top of the foot a couple days ago and she is already sound on it again.

What happened to Ramsey was really something very different, I know that now.  He got a tiny wound just above his hoof right at the age when maternal antibodies are wearing off and before his own had matured.  That wound allowed bacteria into his leg and, gravity being what it is, it ended up in his hoof near the bone.  If it had happened a few weeks earlier or later, that tiny wound probably would have gone unnoticed by all of us, including Ramsey.  I knew at the time, in my gut, that something was different when Ramsey came up lame, but I didn't know what it was then and everything went to hell so fast....I guess I know now, having learned the hard way.  Education is never cheap or easy.

Still, I don't think I will ever see another hoof abscess without panicking just a bit and I am sooo glad that Emma is fine.

There is a new addition over at Farm Buddy's.  It wasn't certain if he was going to be sticking around, but I don't see him going anywhere at this point.  He is a great big, five year old Maremma Livestock Guardian Dog named Buster.

FB has been having a lot of trouble with a fox stealing baby chicks this year.  It was bound to happen eventually, especially with the wild rabbit population being way up this year and the coyote population being (temporarily) a bit down.  The fox numbers are high at the moment.  I am not sure that one bad year out of ten warrants keeping a 90 pound guard dog, especially since the foxes are already suffering from attrition.  I know one got killed in the road, and now that it is August and the coyotes are bringing their pups out into the world, they will kill off the rest of the overly brazen foxes in short order.

But...Buster is a big, sweet, fierce, galumph of a dog who certainly does keep the riffraff away and besides, FB is already a goner over him.   I think Buster will  be staying, even if he does eat ten times more than the chickens ever bring in.  I'll try to get some pictures soon.

There were so many painted turtles sunning themselves on the straw bale in my pond a few days ago that there were some hanging off the edges.  Standing room only. Where do they all come from??? 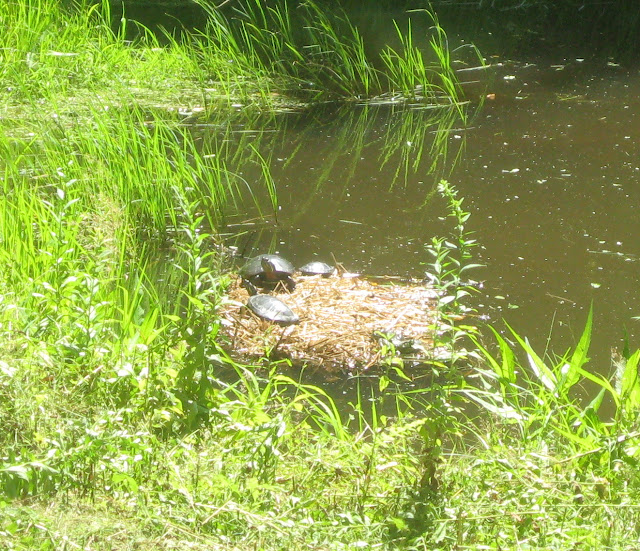