Just Say No to Drugs

Well folks, I still am in the land of the living out here.  I have had some trouble with all the drugs poured into me on Monday and they have been slow to wear off.  Have you ever read one of those little leaflets that comes with every drug - the part that always says something like, 1 in 10,000 people will have adverse reactions to this medicine?  Well, I am that 1 person, every time.

Ironically, I have been having the most trouble with a drug called scopolamine, which is supposed to lessen the side effects of anesthesia.  Instead, it has compounded and multiplied the negative effects of all the drugs and added a whole host of troubles all on it's own.  The worst of it is that it takes 108 hours to wear off, that's 4 1/2 days, and when it finally does, it does not go quietly.  Rather, it causes a whole lot of trouble as it is leaving.  It suppresses absorption of other drugs so when the scopolamine finally started leaving yesterday afternoon, I not only had problems from it, but all the other drugs it had been suppressing climbed out from where they had been hiding and jumped on top of me.  All this, in spite of the fact that I quit taking anything other than ibuprofen as of Tuesday morning.

I also just couldn't deal with the narcotic painkillers they gave me.  I would honestly rather deal with the pain then the drugs.  Pain is a demon I am familiar with, I know it's forms and faces.  The monsters of opiate induced dreams are demons I can't fight.  I swear, if everybody responded to these drugs the same way that I do, the "war on drugs" would come to an instantaneous end.  You wouldn't be able to give the damn stuff away and I know I will never willingly touch any of them again.  I even feel bad throwing the pills away for fear that they might find their way into the ground water and inflict themselves on some poor, unsuspecting fish.  I think I will mix them with some good old fashioned road apples, seal them up in a plastic bag and send them to the land fill.  Hopefully, by the time they escape their manure immersion therapy, they will have been rendered inert and harmless.

At any rate, it is Saturday afternoon and at some point this morning, I hit that magic 108 hour mark and I feel better.  My pupils no longer resemble mismatched serving platters, I am speaking in real sentences and my thoughts feel like they belong to me.  I am tired and a little sore, but that I can deal with.

I am going out to sit on the bench by my back door.  I will play Frisbee with Tanner and after a bit, the donkeys will notice me and come over.  They do every day.  Ramsey will start in on my shoelaces, trying to figure them out.  Emma, my sweet Emma, will put her head and neck over my shoulders and make soft snoring, huffing noises in my ear - a donkey's way of giving and sharing affection.  Is it any wonder that donkeys have been shown to be the best therapy animals in the world? 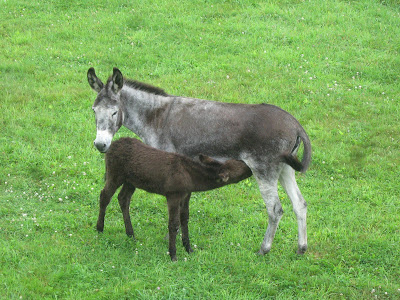 Posted by The Dancing Donkey at 3:48 PM