Tanner is a big believer in putting things by for future use.  He collects, hoards and hides "treasures" better than any dragon ever imagined.  He spends a significant amount of time nearly every day finding treasures and hiding them.  And when I say hiding, I don't mean that he just sticks them under a bush or buries them in just any old hole.  He first has to, very stealthily, carry the treasure around with him while he goes about laying false trails.  I have often seen him pretend to hide something only to immediately pick it back up and very carefully and slowly, walk backward in his own tracks and then leap off in another direction.  Finding the right hiding spot often takes 45 minutes to an hour.  Sometimes, when I see him finally find the perfect spot and truly start hiding his latest marvel, the devil takes hold and I just can't help but yell out, "I seeeee youuuu".  Tanner gives me a dirty look, picks up his treasure, trots off and has to start over again from scratch.  I know, I know, I shouldn't do it.

You may be wondering what sort of treasures we're talking about here.  Well, the occasional marrow bone of course and sometimes, for reasons known only to him, he hides his toys.  I try to stop this when I see him doing it because then he expects me to magically produce new toys for him to play with (this is why he has three identical frisbees, for a while they kept disappearing).  Mostly though, he hides scraps of lumber from whatever project I am working on.  Why one particular cut-off deserves to be buried while the other 500 lay where they are until I pick them up, I have no idea.  You'll have to ask him.  I just know that he keeps himself happily occupied while I am busy working.

At one point, when tanner was just a couple of years old, I accidently messed with some of his hidden  marrow bones.  He spent all day sneakily moving them.  It wasn't until that night when we went to bed that I saw that he had brought every one of them into my bedroom and built a perfect cairn out of them.  I was curious to see what he would do with them so I left them completely alone.  They stayed that way, untouched for months.  I just treated them like a piece of furniture and vacuumed around them.  Then one day, some friends stopped by with a new puppy.  They needed some chew toys for him and I offered some of Tanner's old bones.  I sneaked up to my room while Tanner was distracted and stole a few bones thinking that he would never notice.   The next day, while I was busy and not paying attention, he moved every one of those bones.  Quite a feat considering that he never goes more than a few hundred feet from me and I never noticed him moving them.


All this week I have been working on my garden beds and apparently, the beds and the manure pile are favorite hiding places.  I unearthed at least three treasures from each bed and more than TWENTY marvels from the manure pile.  Keep in mind that I have only been here a couple of years and the manure pile is not that big. The interesting thing (at least to me) was that I could have charted the progress of my house and barn building by the scraps of lumber I found.  The locally produced, rough-cut hemlock that built the barn are distinctly different from the dimensional lumber and synthetic siding that the house is made of.  Since the manure pile kept expanding along with the buildings, I could have charted my construction progress with the bits hidden by my dog.

Just think, all these years I've dismissed Tanner's treasure management as the obsessive-compulsive behavior of a Border Collie staving off boredom.  But really, he's an archivist!  He's been keeping track of important events for me and I wasn't paying attention.

Poor tanner sure has his work cut out for him.  Now that I have messed with his stash, he is going to have to find new hiding places for every bit of history I unearthed this week. 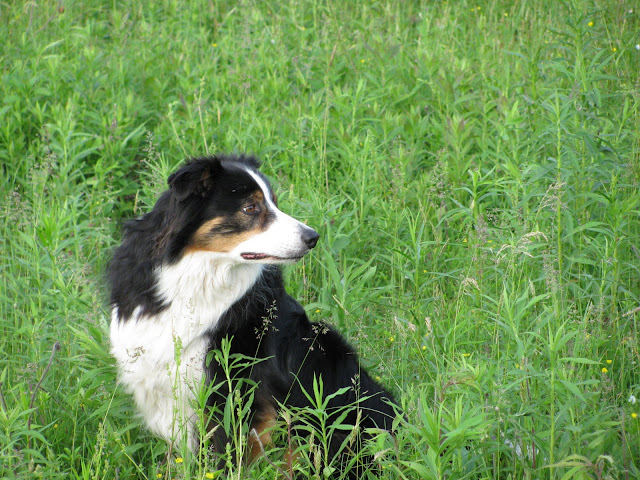 Posted by The Dancing Donkey at 2:02 AM