Am I completely Crazy??

Sooo....I mentioned a little while ago that if Tessa had better conformation, I would be very tempted to breed her to a jack for a mule baby and lots of people were like, "What's wrong with Tessa?  Why not have a mule baby?  Yes, let's have a mule baby!"

First, to be fair to Tessa, most of the things that I don't like about her conformation are the things that make her a gaited horse.  Tessa is a bit of a blueblood in the world of Tennessee Walking Horses/Spotted Saddle Horses.  Her breeders went to a lot of trouble to produce her and they would be perfectly happy with how she is built.

Most gaited horse have, what I consider to be, weak hind ends.  They have more laxity in their stifles, hocks, pelvis etc, because they need that laxity to gait.  I think it causes soundness issues when they get old, but all purebreds have some built in problems like this.  I could point at a lot of quarter horses that don't stay sound past the age of four.  It is really more of a personal prejudice on my part than a flaw in Tessa and is in fact another good argument FOR breeding her to a jack.  That is the most hybrid vigor you can get.

Tessa's right foreleg does turn out at the shoulder and that is not something I would like to see passed on to future generations, but it does not cause her trouble and mules are sterile anyway so does it really matter?  Aside from conformation, the thing you most want in a mule momma is a good temperment because that comes almost entirely from the mare.  This is the one place where Tessa truly excels, I have rarely met a horse that could equal Tessa's calm, sweet, loving and amazingly brave temperament.  Looked at from that point, you would be hard-pressed to find a better mule making candidate.

I have thought a lot about breeding Tessa, but always talked myself out of it.  When I made that remark about breeding Tessa I was expecting my good friends, Elva and Vicki (aka, Riding Buddy) to blow raspberries at me and tell me to get my head on straight.  Instead, they're all, "YES, let's have a mule baby."

And than there is this really awesome jack I have had my eye on for several years because I think he is just soooo handsome and every time I see him I want a mule baby.  His name is Clyde's Gallant Fox  and he has been producing some super, super nice mule babies and the breeders do shipped semem so it would be possible to breed Tessa to him.

I sent an email to my vet figuring she, at least, would help talk me out of this foolishness:

Dear Vet, I may need you to talk me off a crazy ledge. There is this SUPER nice mammoth jack stud who does shipped semen and we are all kind of thinking that Tessa could make a really nice mule baby and I would love to have a mule baby to raise. Sooooo, yeah, mule baby???

I would need a vet to help with all the AI work. Do you do that? Am I totally crazy? Honest opinions needed!
I was expecting her to tell me to stop being an idiot and instead, her reply was:


That mammoth jack is pretty awesome looking! I think they would make a really nice mule!

And then later in a different email:

So much for talking me OFF the crazy ledge. So...yeah.  Mule baby???  I'm seriously thinking about it.

I have a thousand opinions on the subject that have been clogging my brain waves for weeks now.  I will tell you some of them later, but right now, it is your turn to talk me off this crazy ledge.  One way or the other.

What do you all think:

A) NO WAY!  Kris is totally off her rocker, get her some therapy.

B) YAY!  Let's all go off the crazy ledge together and watch Tess have a mule baby!! 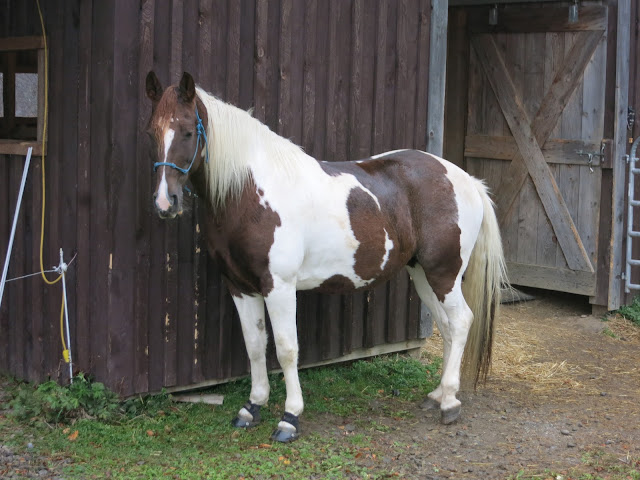