It turns out that the stray has a name - it's Lucy. 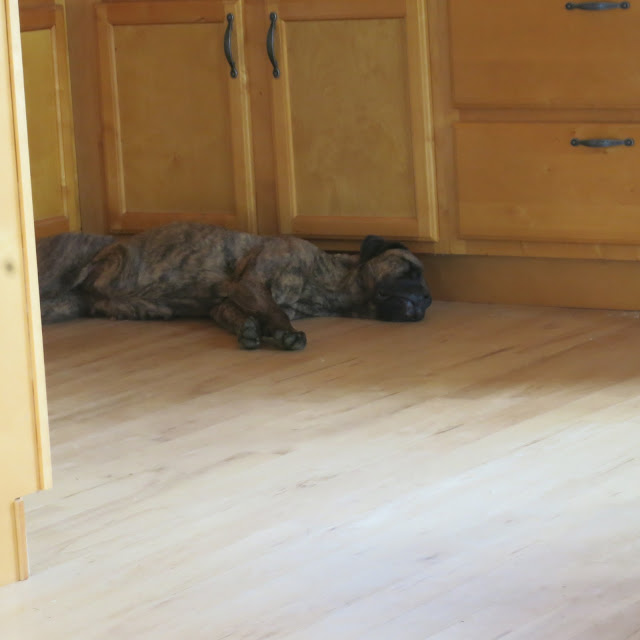 Late last night, I got a message from a local woman who was sure this was her dog.  Since I had several people tell me that they were sure this was their dog, I asked her for some pictures and some history about her.  She was able to provide both, which the other people had not. 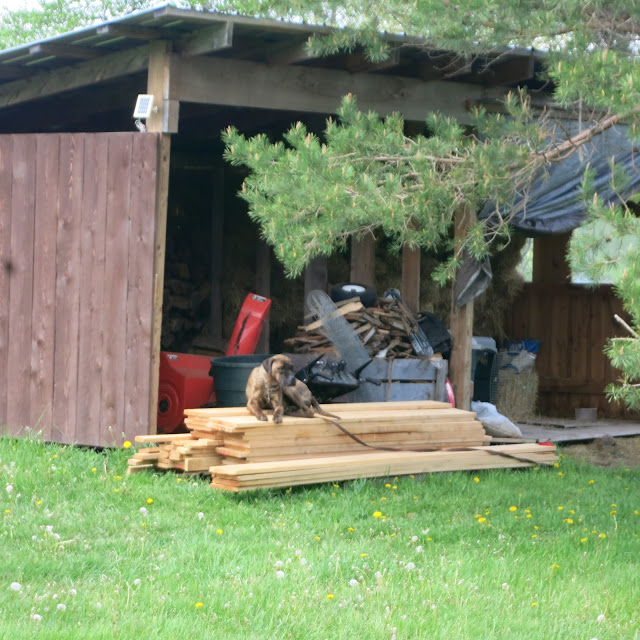 Turns out that Lucy is a purebred Bull Mastiff who never quite fit the breed description.  I thought she was some variety of Boxer/Mastiff/something crossbred, but I was wrong.  I told Lucy not to worry since she is not the only one around here who does not fit the mold.  Personality means much more than breed standards on this hill and Lucy certainly wins on that score.

Lucy's people live in the nearby village, next to the church.  About a month ago there was a large funeral there with a lot of cars and people.  Somewhere along the way, Lucy got let out of her fenced yard and went for a walk about.  Since she is not normally a wanderer, I suspect she met a porcupine somewhere near this time and, after an unfriendly introduction, panicked and took off.

In the short time Lucy was here I saw in her the personality type that I affectionately call the clueless coward.  She is inquisitive and curious and has no compunctions whatsoever about striding into a new situation and introducing herself.  At the same time, she is timid, easily startled and backs off at the slightest hint of rejection.  I can very easily see Lucy walking straight up to a porcupine and then taking off in terror when she hits the quills.

Lucy also has some kind of neurological issue that I noticed the first time I let her off the lead.  She was wandering around, checking things out and then started trotting in circles.  The circling was clearly a compulsive behavior.  She could be stopped or distracted out of the circling, but she didn't seem to have a lot of control over it.  Apparently, she was born with some neurological problems and has had this issue her whole life.  It is generally manageable and not a big issue in her own environment, but it is easy to see how a dog like Lucy could get lost in the woods.

She has been out on her own for about 4 weeks and I don't think she would have lasted too much longer on her own.  She was badly dehydrated, malnourished and exhausted when I found her.  After sleeping for almost two days straight, drinking copious amounts of water and getting a LOT of food in many small meals, she is well on her way to recovery.  She even felt well enough to go for a walk with Connor and I this afternoon, staying on her feet this time. 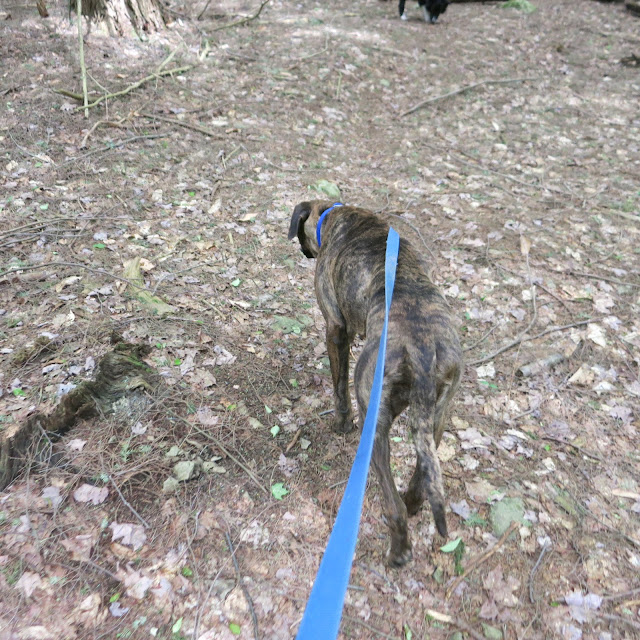 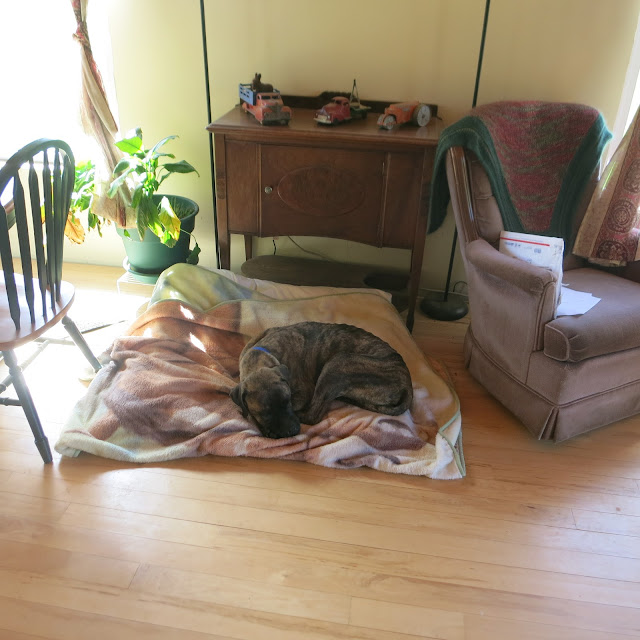 This picture really sums up the colossal personality difference between Connor and Lucy.  They got along well enough, but are so different they may as well be from separate planets.  It is hard to believe they are actually the same species.  They got along, but did not interact much as they clearly did not speak the same language. 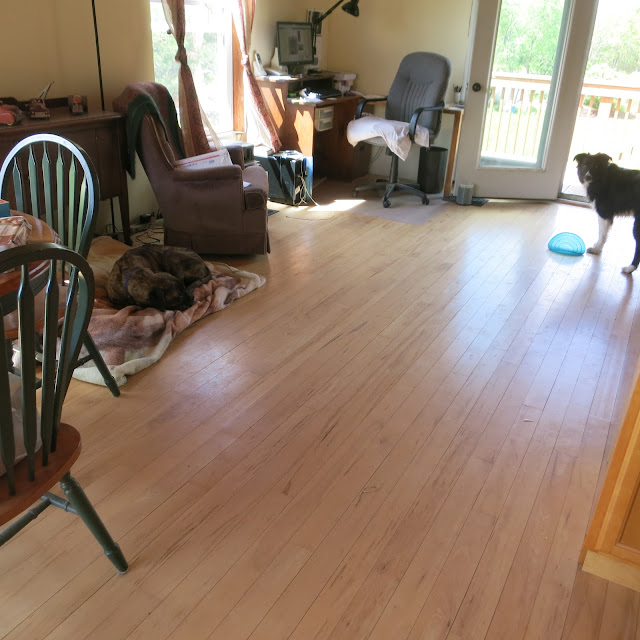 A few hours later, Lucy's people showed up to get her.  They had given up hope of finding her, but thanks, once again, to the blog, they have been reunited.  I am very glad to have been proven wrong and find that Lucy was not abandoned after all.  I am also glad I was here to help her when she needed it and I hope she has a long and happy life - at home in her own yard and on her own couch where she belongs.

Bye Lucy, it was nice meeting you. 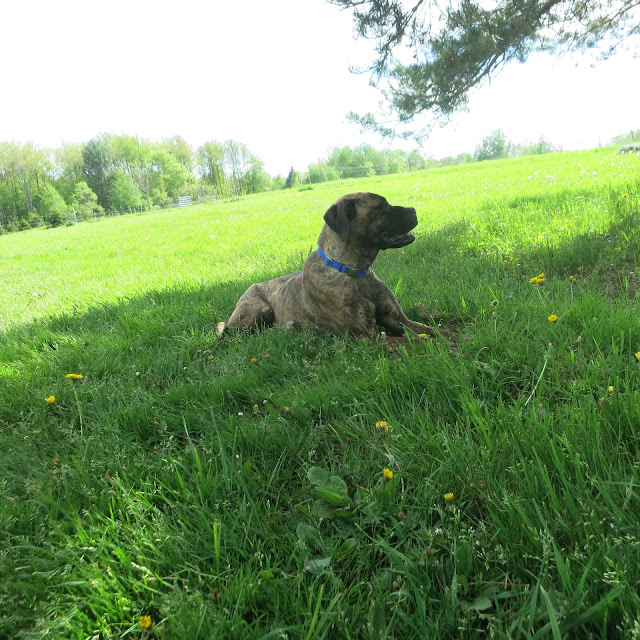 Posted by The Dancing Donkey at 1:33 AM