The other day when Lucy (the stray dog) was still here, I went out to the barn in the morning to feed and, since Lucy had been doing so well off lead, I let her off her rope as well.  She had been very respectful of the donkeys and had kept her distance, but all of a sudden she ducked under the fence and went into the back of the barn.  It was empty at that moment, but I knew it would not be for long and there is no way that dogs are allowed in the donkey barn, especially not at breakfast time.

It was foolish on my part because I have come to take for granted that Connor knows better than to ever cross into donkey territory.  He will come in the barn when they are not around, but at the first hint of hoof beats, he hightails it back to his side of the fence.  Lucy, in her somewhat clueless fashion, simply charged right in where angels would fear to tread.

I immediately went in after her and tried to call her to me, but she ignored me.  I raised my voice just a bit and said LUCY. COME. HERE. and I went after her to get her out of the barn before anyone with long ears noticed that there had been an invasion.

There must have been the faintest hint of panic in my voice though.  Donkeys may not understand all of our words, but they certainly understand every tiny nuance of emotion, even when we don't hear it ourselves.  Unfortunately, they aren't always any better at interpreting those emotions than we are.

Suddenly, Ben, who is normally a big, squishy, cuddly, gentle teddy bear, was right there with fire in his eyes and smoke pouring from his flaring nostrils saying loudly and clearly,

"Don't worry Ma, I'll protect you from that nasty dog.  I'll make sure she rues the day her father ever got a glint in his eye!!  Just let me at her!"

Kind of the donkey version of a Lassie movie.  Ben decided that I needed protection and he would gladly have stomped poor Lucy to bits.  I was trying to wave him off, which only made him more certain I needed help and also got Ramsey and Emma's attention.  They promptly rushed over to help.  This all scared Lucy to bits so she froze in place and would not move, which was soooo not helpful.  I finally got her moving, waved off the fire breathing donkeys and got Lucy scooted back under the gate.  A minute later I had her safely back on her lead and the donkeys went back to being sweet, cuddly teddy bears.

Donkeys are often used as guard animals and this was a perfect example of why.  It was also a perfect example of why they should NOT be used as guard animals.  One of many reasons.  Donkeys can be fierce protectors, but they are the ones who decide who, what, where and when they are going to protect and they decide what is and is not a threat.  Often as not, the "threat" turns out to be a newborn lamb or calf that suddenly appears in their pasture.  It's perfectly reasonable from the donkey's point of view, but it sure does piss off the farmer.

Ben has become very attached to me since he came here and I probably should have anticipated this, but I have never seen him get upset about much of anything and I did not give it a thought.  I knew Ramsey would object to a strange dog in his space so he was the one I was watching.  My big grey knight was a surprise.  Ben saw the dog and didn't mind her until he heard that hint of panic in my voice.  I was worried about Lucy, but he interpreted it to mean I was afraid of Lucy and that was that.  From teddy bear to fire breathing dragon in the blink of an eye. 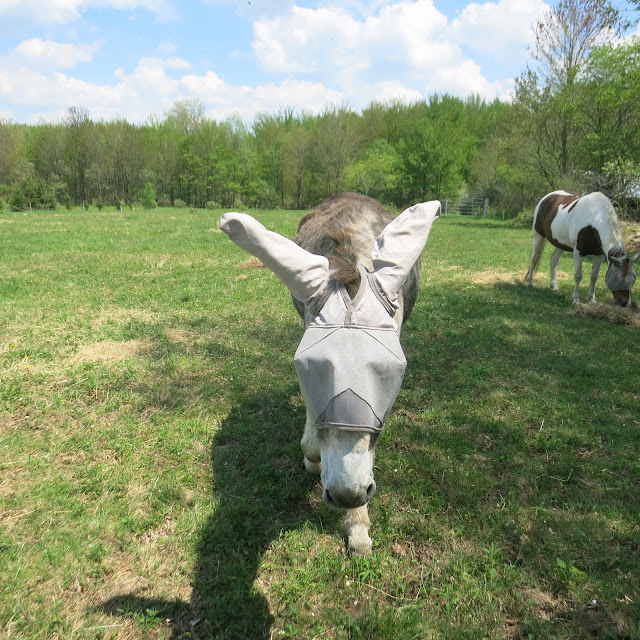 Posted by The Dancing Donkey at 9:28 PM