Here comes another guest blog from the farm!

This one involves Bess, the amazing Maremma, and Caterina, the famous guard llama. 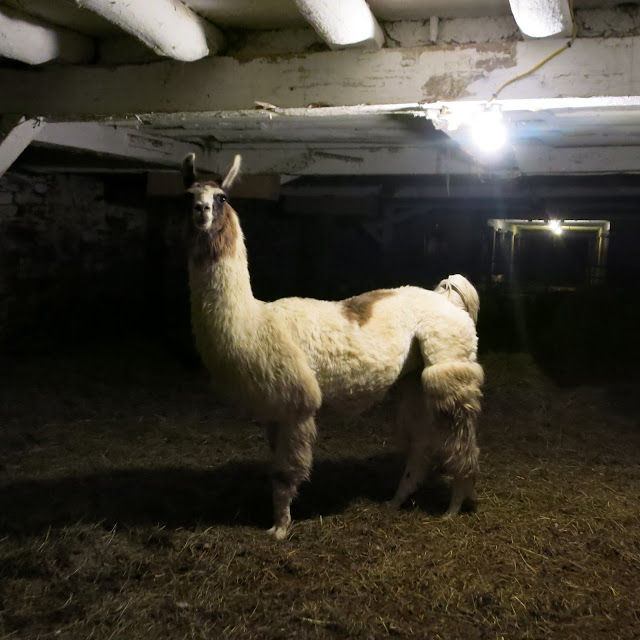 In case you have been wondering, Caterina has been doing great.  She loves the sheep, and she is completely happy and content every day, except for the one day a month when she has to have her shot to control those meningeal worms.  Actually, this only bothers her for the three minutes it takes to catch her and have Kris administer the shot.  Otherwise, Caterina spends all of her time doing whatever she likes, which is mainly wondering around her twenty-five acre pasture when the sun shines or resting in the spacious, comfortable barn with her sheep where there is free-choice, unlimited, beautiful second-cut hay for them to eat, along with buckets of clean water and minerals (of course Caterina has her own special minerals). 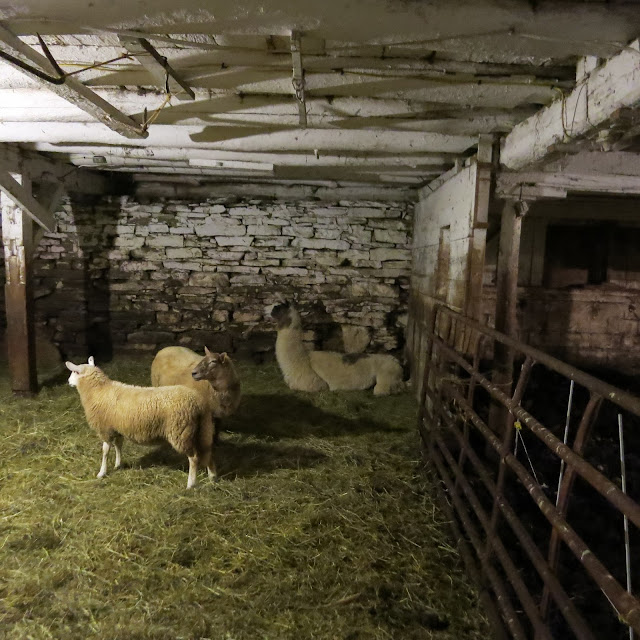 So anyway, Caterina’s life had been perfect until about ten days ago.  Then things all changed with the arrival of the RAM. 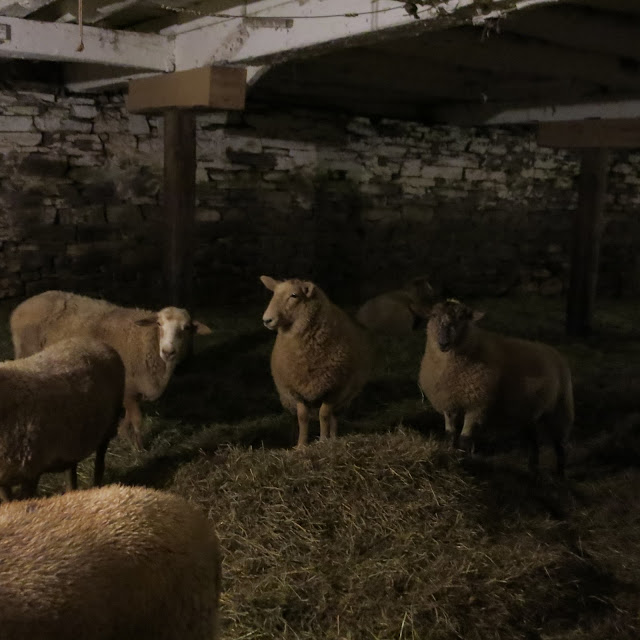 The ram is a North Country Cheviot named Shelby (I call him Rambunctious), and I co-own him with a neighbor. 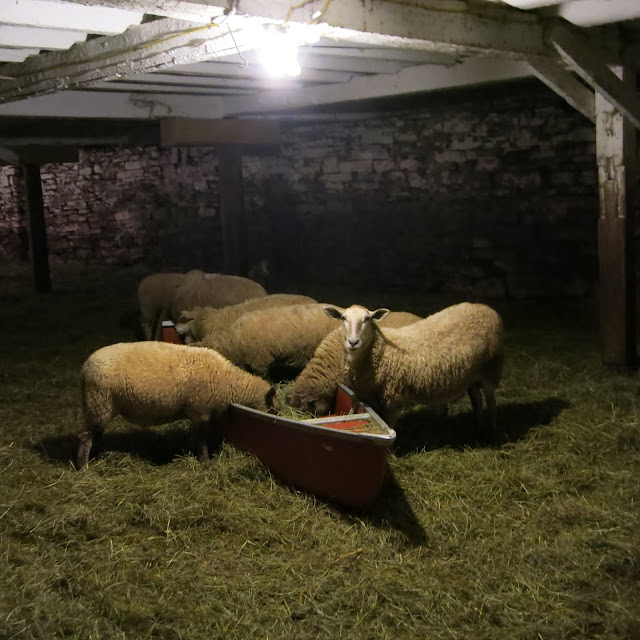 Caterina hates him because he has disrupted her perfect world.  He chases the ewes around, and they sometimes chose to follow him around instead of staying with her.  The nerve of them!!  I mean, it is like your best girlfriend abandoning you to go on a date with a boy!! 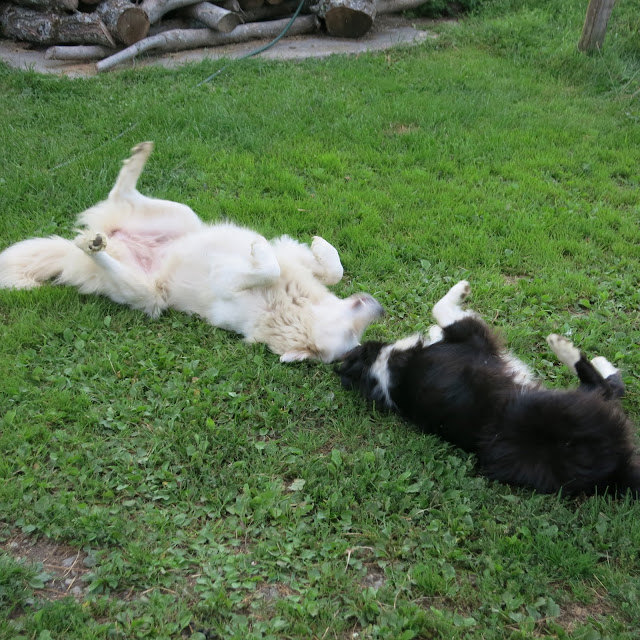 Oh the injustice of it all! 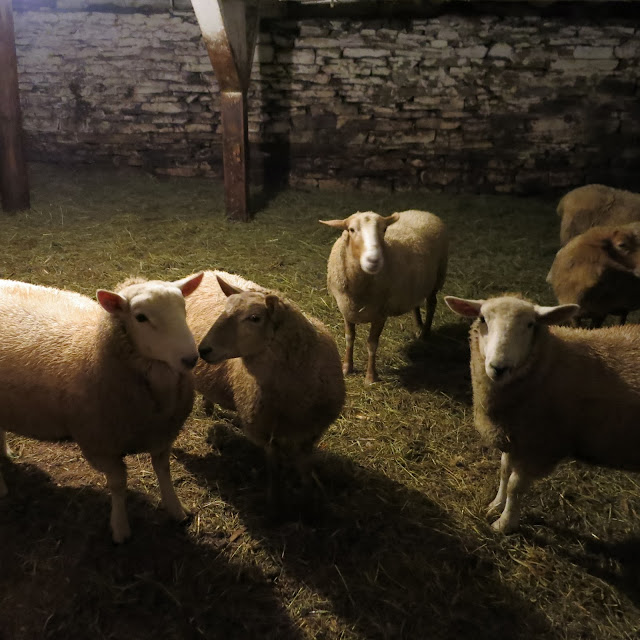 Caterina has expressed her displeasure in her normal way, which is to leave home.

She will eat her hay, hang out a bit with the sheep, and then go out in the pasture all by herself, not bothering to return in the evening.  The first evening this happened, I was in a panic!  I was running all over her pasture, which of course involves a big hill, calling her name, but to no avail. 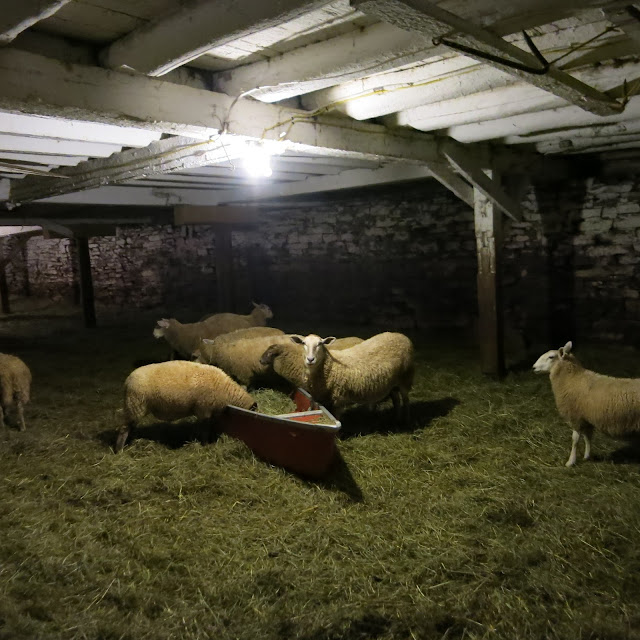 While I was doing this, the dogs were all eating dinner, so I had no assistance.  Anyway, I really believed that Caterina would eventually return, as it was a cold, snowy/rainy evening.  At that time, we had snow on the ground, and you can imagine the difficulty of searching for a mostly white llama in the dark on snowy ground with a pitifully weak flashlight.  Enter Bess the wonder dog!!! 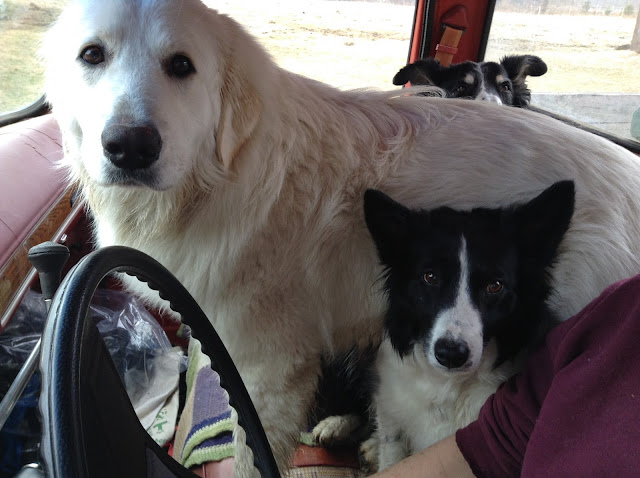 I ran back to the house and asked Bess if she would be willing to help me.  Of course, she agreed and took right off up the hill.  She then veered towards the woods, and I mentioned that I had a feeling that Caterina was on the top of the hill.  Bess gave me the how-can-you-be-so-dumb look and continued on towards the woods.  I glanced that way with the almighty-powerful flashlight, but did not see anything and continued up the hill.  Bess gave me the get-back-here-dummy look, and refused to follow me, so I checked that area again.

Sure enough, there was Caterina!!!

Of course, we were quite a ways from the barn, and I did not have any halter or rope to lead her with.  I was wearing a tee shirt, sweatshirt, and my Carhart vest.  I removed my sweatshirt, which left me shivering in my tee shirt, and proceeded to tie it around Caterina’s giraffe-like neck. 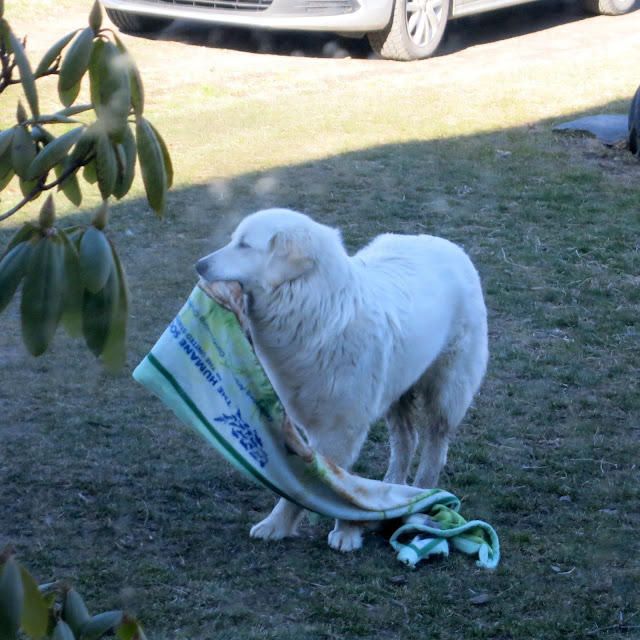 Caterina let it be known with a couple of well-aimed spits that this was not the proper method of leading a llama.  I negotiated with her, mentioning that it was now eleven o’clock in the evening, I was freezing, and she probably could use some fresh second-cut hay.  She considered her options and then calmly followed me back to the barn.

This pattern has repeated for days now.  Mostly I remember to look for Caterina before evening, but if I forget, I just tell Bess to find Caterina, and off she goes!  Things are calming down in the barn, as probably most all of the ewes are bred, and Caterina is adjusting.

When I put new hay out, which I feed to them in a canoe, Caterina does not let Rambunctious eat.  She spits at him if he comes near, and he has to wait until she is finished before he dares eat.  She has established some baseline rules, and he is learning to obey them.  Just think of all the good she could do in Washington regarding the new administration!

Kris has promised to include some great pictures with this blog posting.  Hopefully there will be pictures of Bess and Caterina, and also possibly SkipTaMaLou, who is absolutely the most wonderful cat in New York State and possibly beyond. 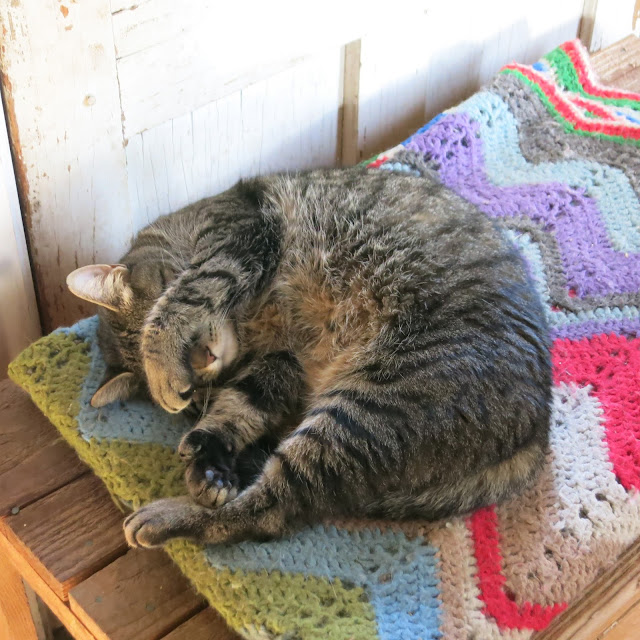 That’s it for now.  I will leave you with this tasty tidbit of information…Guess what llama is going to possibly have a baby in June?  Yes, and don’t think I had anything to do with it, as she arrived in that state.  I had no intentions of having a baby llama, but Caterina arrived that way, and if it is a girl, Caterina will get to keep her forever!!!!!

Posted by The Dancing Donkey at 7:09 PM