It started out as a totally normal, boring morning.  I headed out to feed the herd and instead of three happy donkeys and a happy horse, I found two happy donkeys, a horse and one very unhappy Ben.

I love my donkeys, I really do, but sometimes, I think they might be the death of me.

I found Ben standing against the wall in the barn, shivering uncontrollably, unwilling to move and in clear distress.

Emergency protocol: Look the animal over from head to tail, noting everything, but not focusing on anything.  What I see in a ten-second assessment is:


Immediate emergency assessment:  I have an animal who is not about to drop dead, but is in clear distress and needs help.
My initial diagnosis is that Ben was "tying up".  Most of the symptoms fit, but it is not something I would ever expect to see in a quiet, laid-back donkey.  It is usually seen in Thoroughbreds or Quarter Horses who are in heavy work.

After a lengthy discussion with the vet, the three most likely diagnosis are:
If this turns out to be Lyme, then I think the only appropriate response is to drop a nuclear warhead on this whole county.

As treatment, I gave Ben a very mushy mash made of hay pellets and warm water with two teaspoons of salt in it.  This should help raise his sodium levels and increase his desire to drink.  He will be getting electrolytes for several days and will be getting salt and magnesium in his feed every day from here on.  He got a big dose of anti-inflammatory pain-killer and will continue to get them for the next few days and he is now sporting on overly large green blanket. 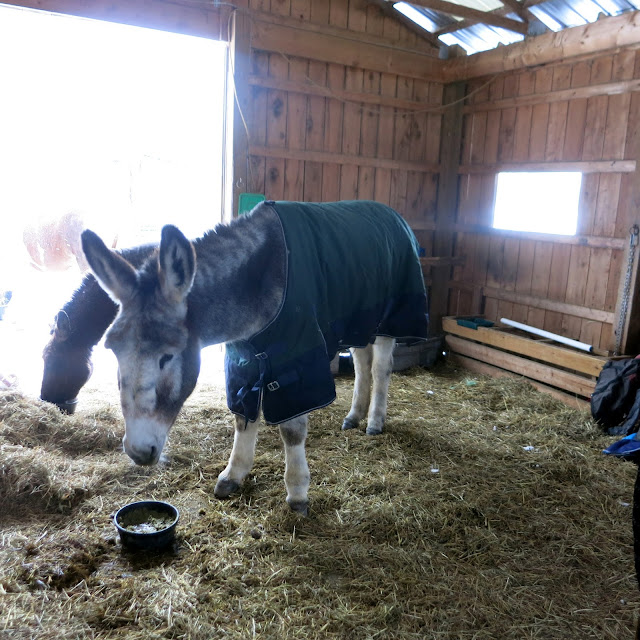 By evening, he was showing improvement and was willing to go out and walk around on his own for a bit.  Hopefully, he will continue to improve and I won't need any help because getting a vet out here on a holiday weekend.....not likely.


Posted by The Dancing Donkey at 2:15 AM