It was an amazingly beautiful day.  We have not had many so we all have to take advantage of what we get.  Riding Buddy and I had plans to do just that and get out for our first ride together this year.  However, we had a wee lapse in communication.  Instead of meeting in the middle as we usually do, we got our signals crossed and bypassed each other.  I'd gotten slowed down a bit as Tessa had to stop twice to allow her nose to be petted by little girls and then had to face down a speeding 4-wheeler; all of which she handled with grace.  I haven't seen so many people out on my road in...well, ever.

I made it all the way (down hill) to RB's house and realized what must have happened (or what I hoped had happened, the alternative being a loose horse and a lost rider).

Poor Tessa, she had been looking all over for her handsome beau and thought it was the grossest betrayal to make it all the way to his house only to find that he wasn't there and I wanted her to head back up the hill double time to find RB.  Poor fat, out-of-shape Tessa.  She thought the idea of a gallop through the woods sounded like a grand idea - for the first quarter of the way up the hill that is.  After which point she decided that maybe true love isn't all its cracked up to be after all and moseying up the hill huffing and puffing might be a better idea.

We did make it back in near record time and found RB just getting to my house, ready to ride.  Tessa was hot and sweaty, still in her winter woolies, and ready for a nice nap.  We went out for a short easy ride in the woods to cool down before RB headed back home though. 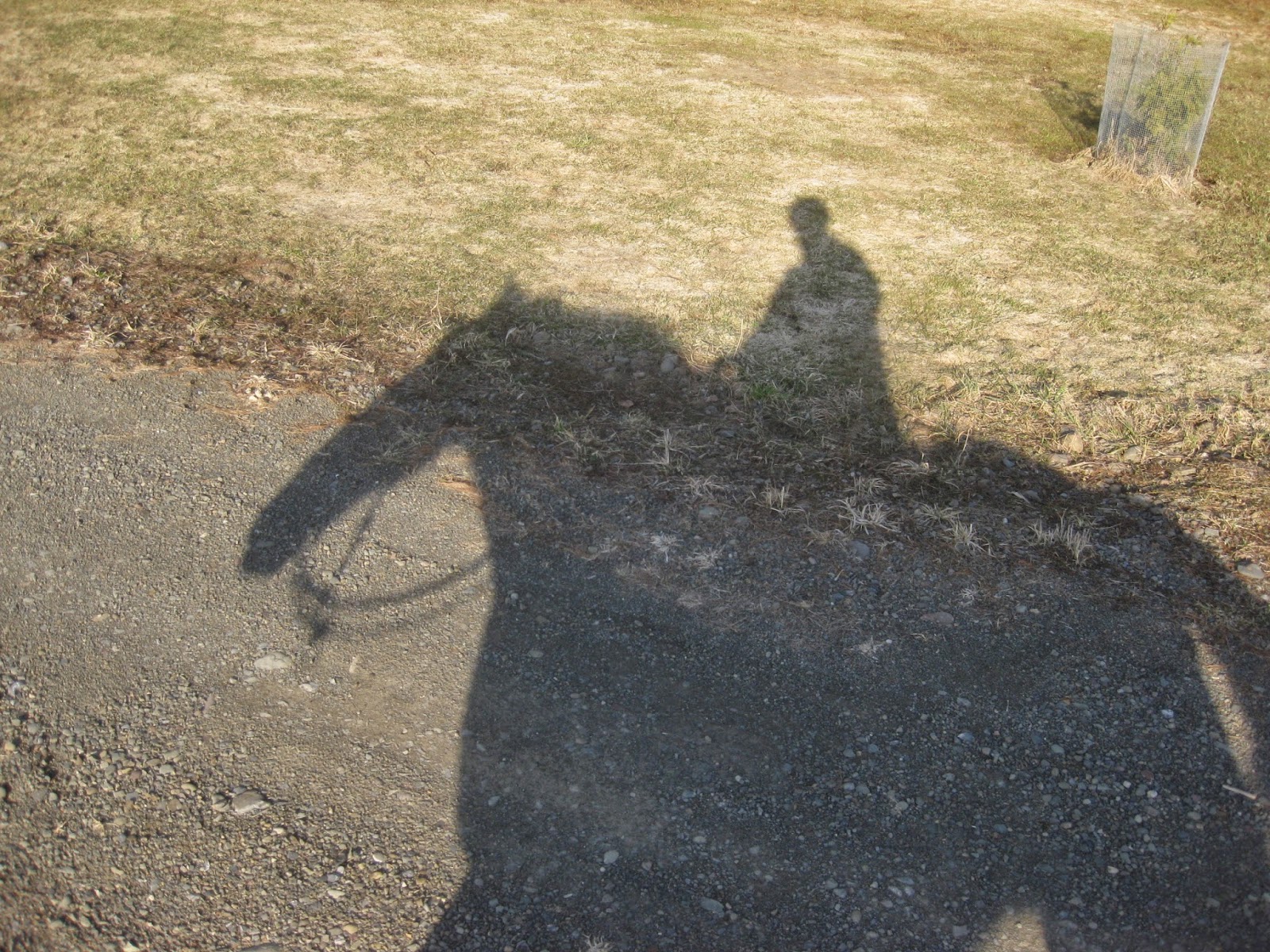 By the time we got back to the barn, Tessa was plum wore out. All that running around in the woods is hard work for a fat pony in winter wear.  Good thing she has someone to come home to and tell all her woes.

"Oh donkeys, you wouldn't believe the day I've had." 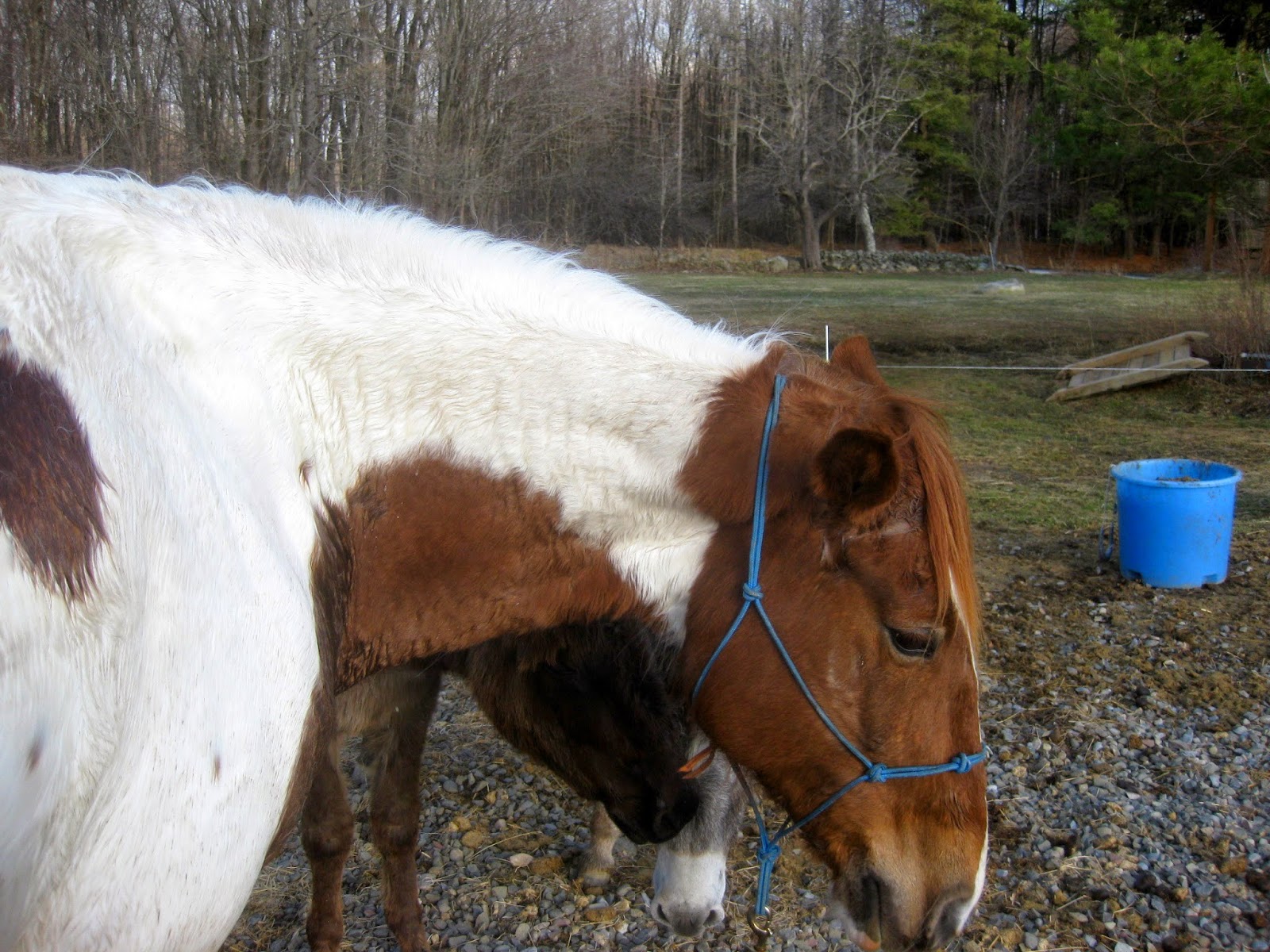 "And, can you believe it, now Ma is giving me a COLD shower." 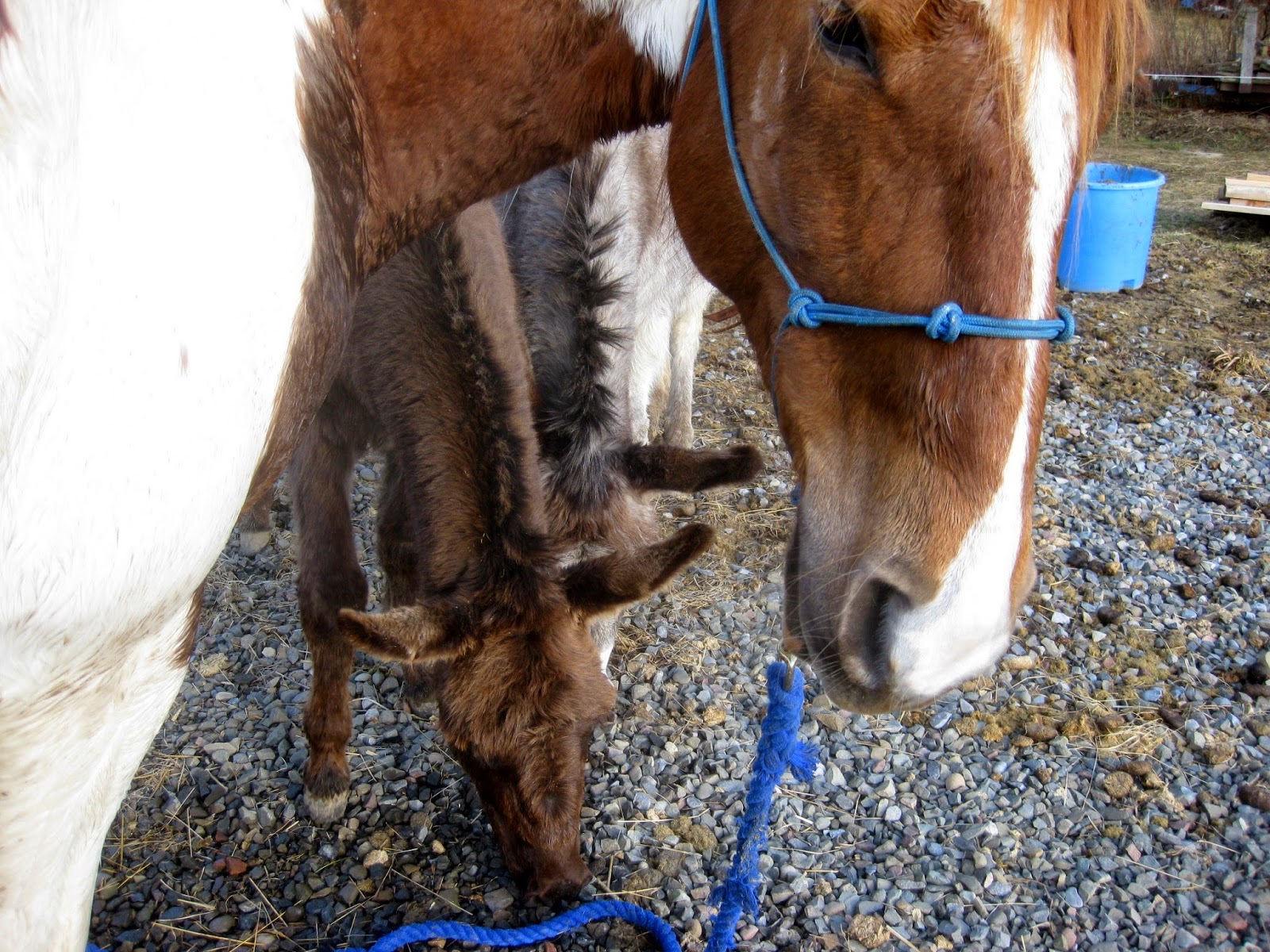 Emma: snort! "You better hope Ma doesn't get careless with that hose and get us donkeys.  Here's what I think of cold showers 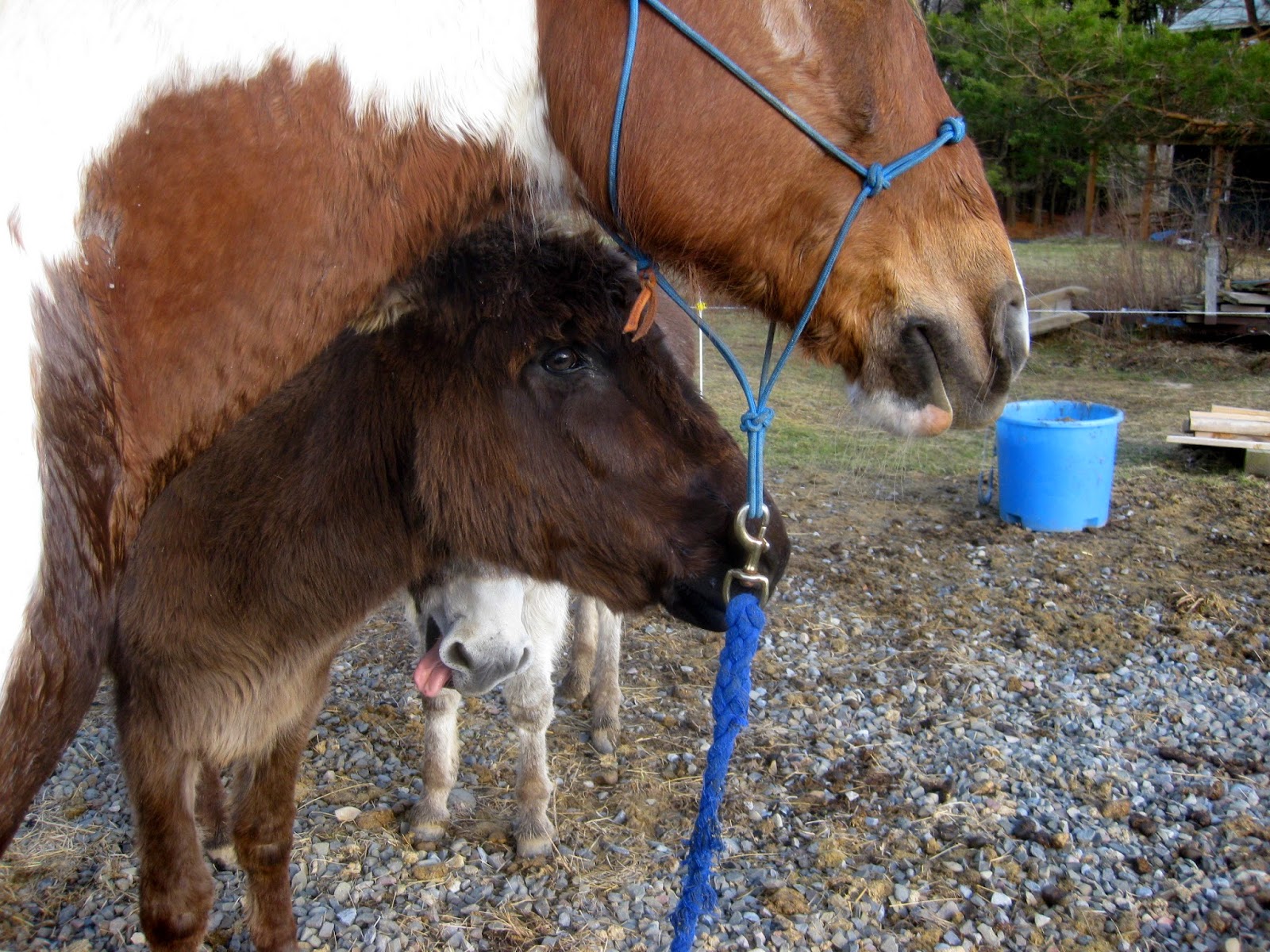 "dON'T WORRY aUNTY hORSE, i'LL LOOK OUT FOR YOU.  yOU KNOW LIFE CAN'T POSSIBLY BE BAD WITH ME IN IT." 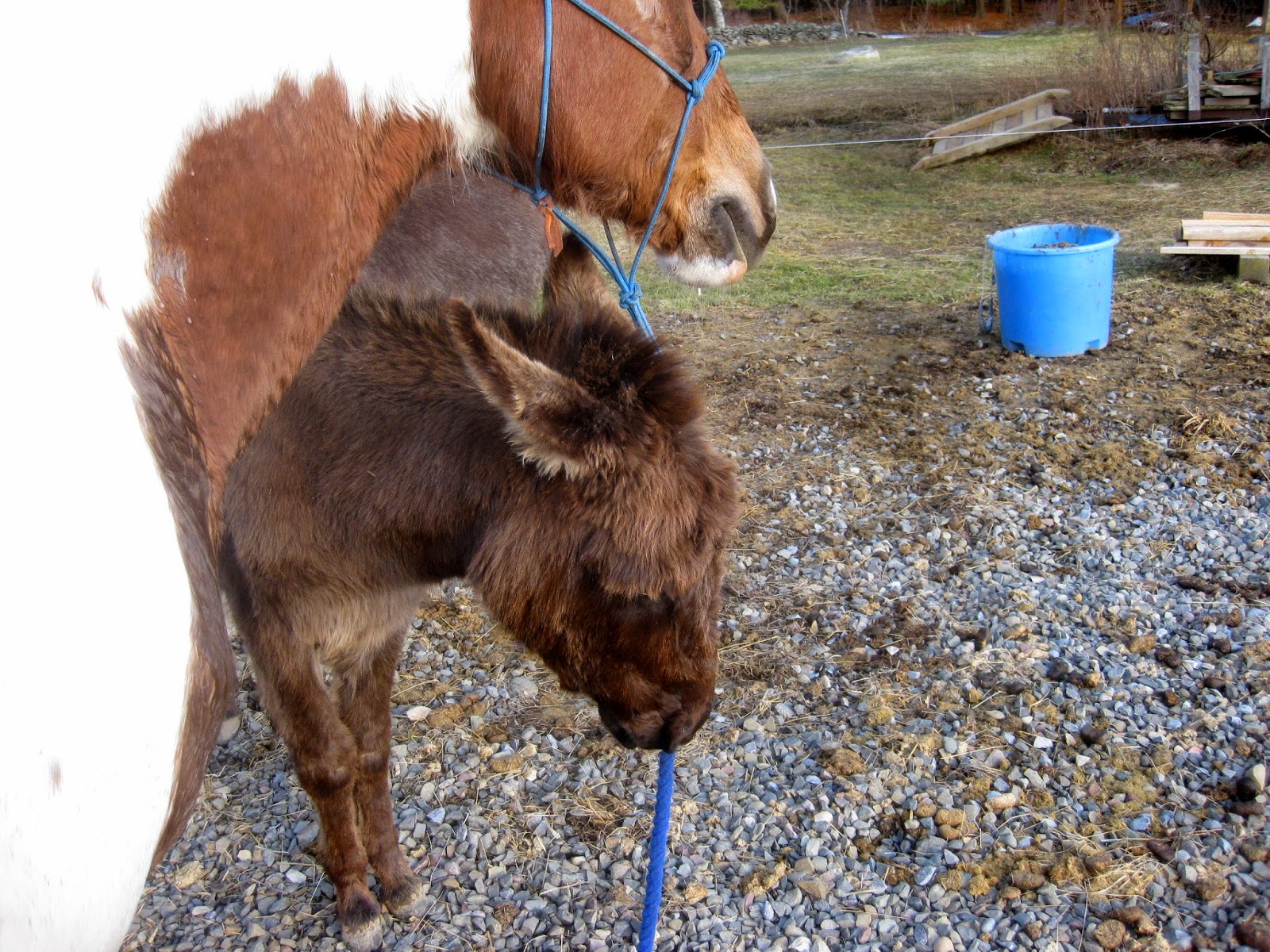 Posted by The Dancing Donkey at 1:57 AM