May your life be interesting.

Is it any wonder this is considered a curse?  It's been "interesting" around here the last few days.    Late last week, I noticed that Emma was having trouble chewing her food and it got steadily worse each day.  She is right at the age where she is losing her back baby teeth and growing in her adult teeth so I figured that was the problem and it ought to resolve itself once those pesky caps fell off.  By Sunday morning, she was having so much trouble though, that I had resigned myself to calling the vet first thing Monday morning to have her checked out.

In dire need of an escape from my own wheezing bout of asthmatic bronchitis, I took Tessa out for a ride Sunday afternoon with RB and returned around 6:00 to find Emma in considerable distress, drooling copiously and unable to swallow because she was choking on her food.

Choke in equines is a little different then in humans as their anatomy is different.  Horses and donkeys can not breath through their mouths, only their nose, so they are not at immediate risk of suffocation as a person would be.  However the risk of perforating the esophagus or having food get stuck in the larynx and being aspirated into the lungs is higher.  Choke is a very scary thing.  It often does resolve on its own or can be resolved by massaging the throat, but if an animal has been choking for more than an hour, immediate help is needed.  Of course, it was Sunday night and it took over an hour to even get in touch with a vet.  She was another hour away, but would head out.  While waiting for the vet, Emma got even more distressed and started rolling and pacing.  Just about the time I was really getting frantic and trying to stop Emma from throwing herself on the ground once more, she suddenly gulped once more and.....finally swallowed.  She immediately calmed down, swallowed several more times and was better.

I called the vet back, she had just left, and we decided not to do any more that night as the immediate crisis had passed.  Emma was able to eat a very soft mash of thoroughly soaked hay pellets  and we made plans though for the vet to come out as soon as possible with her dental tools to check Emma's teeth, which we did this afternoon. 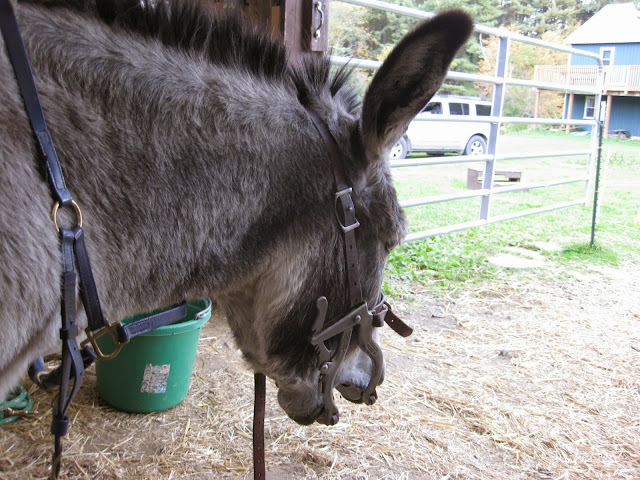 She had several caps (baby teeth) that had partially broken off and gotten stuck.  Every time she tried to chew, those sharp points were digging into her cheek and gums.  There was also one cap that should have fallen off a while ago, but didn't, so the new tooth underneath has not been wearing down properly.  The vet ground that down and her mouth is now in good shape.  For now.  She has several more caps that aren't ready to come out yet.  I devoutly hope that we won't be doing this again in a few months! 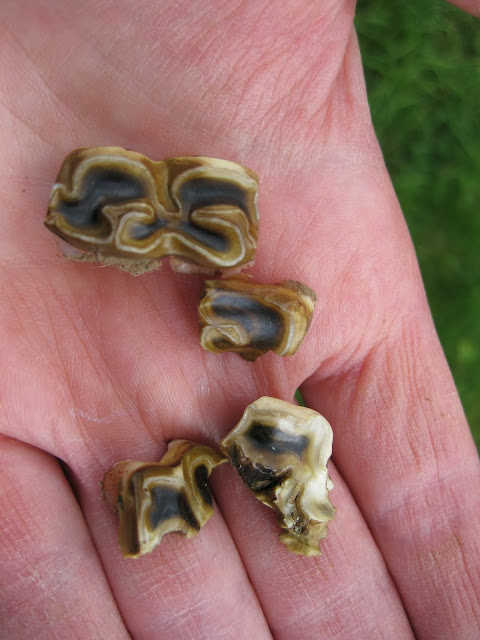 The good news is that, before the vet even left, Emma was feeling good enough to nibble some hay, which she hasn't touched in three days. 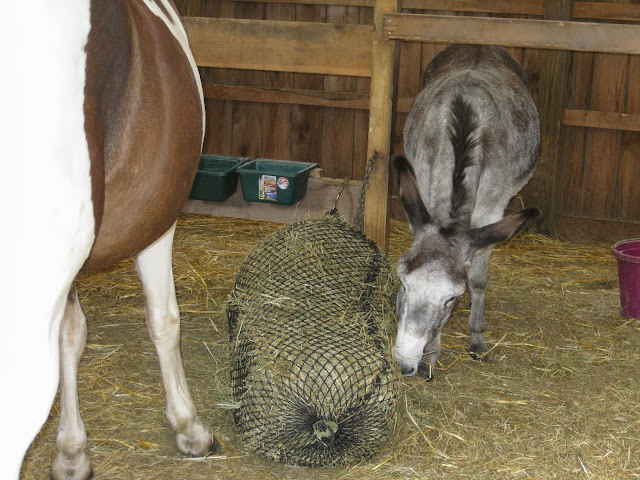 I LOVE my young donkeys and having a baby donkey has been one of the best things in my life.  But, I have to confess that I will be very glad when they both get a little older.  Baby donkeys seem to be rather fragile creatures.  Or maybe it is just MY baby donkeys.  Either way, I'll be very glad when everybody is a little older, a little tougher and has all their damned teeth!
Posted by The Dancing Donkey at 8:43 PM