Well, the Big Storm seems to have leap-frogged right over the top of us and we are unscathed.  The power did not even go out which I am surprised by, but grateful for.  The winds moved up about a thousand feet off the ground and sailed by overhead.  It was a little eerie actually, about 11:30 last light the wind and rain just stopped and everything felt very still and quiet.  However, looking up, the clouds were swirling and flying and listening carefully, I could hear the far off roar of the wind.  I hate to think what it would have been like if it had come back down to earth.

The wind and rain did come back, but nothing to complain about.  It is soggy cold and dreary, but that is not unusual.  I think most people around here feel as I do, extremely grateful to have been spared from this horrible storm and saddened by the havoc and devastation in the areas that weren't.

As for Ramsey....the meds are doing their job.  His temperature was back down to 102 this morning, which is the high end of normal for a donkey his age.  His foot is still terribly sore, but he is remarkably cheerful about it all.  He is in pain, but he just hobbles about on three legs and goes about his business.  Granted, he wants to just stay on the barn, but with the weather, who can blame him?

I soaked his foot in a solution of CleanTrax, which is a relatively new product.  It supposedly treats abscesses, but I have never used it this way before so the verdict is still out as far as I am concerned.  It can be kind of a lengthy procedure as the foot is supposed to soak in the solution for 45 minutes and then spend an additional 45 minutes wrapped in plastic so that the gas it produces can continue to work.

I finally devised a very easy and effective soaking boot which was quite simple.  I used a bread-bag (folded in half lengthwise because his feet are so tiny) and reinforced it with duct tape.  I put the bag over his foot and taped it on at the fetlock then poured the CleanTrax solution in.  (Here is where donkeys are much easier to deal with than horses, I would have spent considerable time making sure that the horse didn't freak out about the bag on his foot.  With Ramsey, I put the bag on, he gave it the hairy eyeball, I scratched his neck and told him all was well, he believed me and stopped worrying about it.) 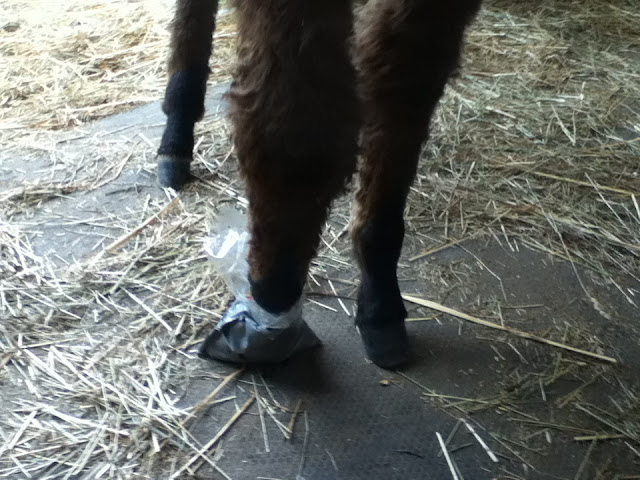 Once the bag was in place, I filled it with the CleanTrax and went about cleaning the barn.  The stuff stays active for 90 minutes and I didn't have any other feet to soak so I just left it.  When the time came, I just poked a little hole in the bag to drain it and left the contraption on for another hour.

I can see where the abscess is draining some out of the bottom of the foot, but there is a spot on the coronet band where it is clearly about to break open.  Once that finally happens, everything will start to heal.  As long as I can keep junk out of that darned hole anyways.

Last Friday, before Ramsey came up lame, I had spoken with the vet and made an appointment for Nov. 9th to have Ramsey gelded.  I hope this whole foot thing does not delay that.  He is just old enough to geld and we want to do it before the cold weather sets in.  It is too dangerous to do the procedure in real cold and waiting for Spring is not an option.  By then, he will be old enough to be making babies of his own and THAT is not gonna happen.  Recently, he has been showing signs of imminent testosterone poisoning as well.  The sooner we get this little procedure done, the happier everybody (including Ramsey) will be.
Posted by The Dancing Donkey at 8:00 PM