Several people have asked me about how Tessa got hurt.  I did write about this a little, but it was quite some time ago, in fact, it was my very first blog post (click here for that post).   The short answer to the question is that Tessa got kicked by another horse, a mare named Sprinkle.  Sprinkle got Tessa trapped in a corner of the barn and kicked her in the middle of her canon bone, her hock, stifle, hip and various other portions of her hind end.  Tessa suffered several fractured vertebrae, a damaged stifle, bone bruises in her hock and canon bone and a great deal of soft tissue bruising and tearing in her hindquarters.

The longer version requires a bit of history....Sprinkle came to me from an older gentleman who used to have a farm a few miles from me, I used to buy hay from him.  He raised dairy heifers and at some point in the distant past, someone had asked him to care for Sprinkle and those people simply never returned.  By my reckoning, Sprinkle spent at least seven years living there and was basically untouched in those years.  He certainly did feed her though, by the time I met her, she was profoundly obese.  This is Sprinkle, at least 100 pounds lighter(!!) then she had been... 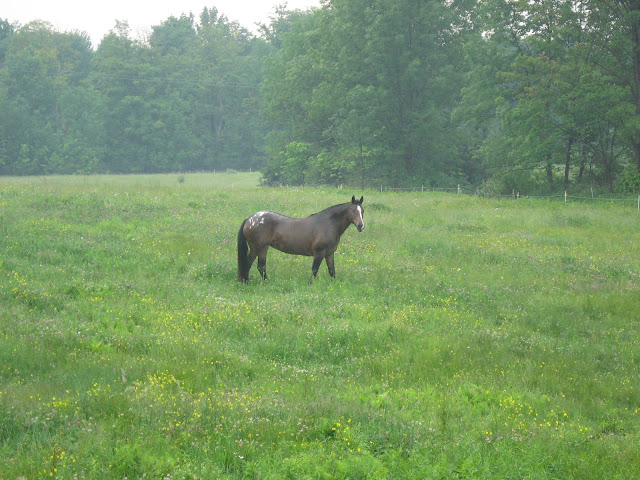 As so often happens, the farmer decided to sell out and move to Florida.  He came to me asking if I would please take Sprinkle.  I was very dubious about this, as any long time horse owner can tell you, there is no such thing as a free horse.  The two deciding factors were that her only other option was a trip to the auction, most likely ending in a slaughter house and that she had a large brand on her hip.  Generally, the only horses around here who have brands were trucked in from out west.  They are usually fairly well trained come from decent stock.  So, sucker that I am, I said yes.

We had a rather rough start because Sprinkle and my old mare, Suki, did not get along at all.  This is a photo of Suki from a few years ago, she was in her early twenties here.  The rump you can see to the right was one of the draft ponies I rescued.... 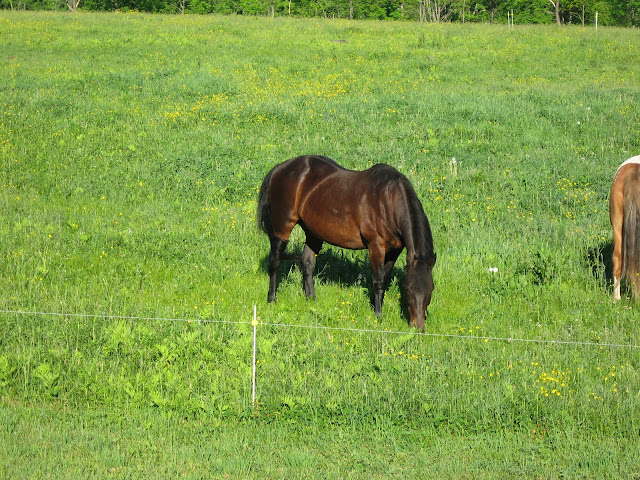 Horses always take time to work out a pecking order.  Suki is an extremely dominant alpha mare, not a bully but a true alpha, a leader.  It usually takes her about 4 seconds to establish that she is the boss and that is the end of it.  However, she and Sprinkle took much longer and were much rougher than usual.  They did eventually work things out and became good friends.  I put it down to Sprinkle having lived with nothing but cows for so long and dismissed it.  After our initial difficulties, I was proved right about Sprinkle being a good riding horse and she became quite a nice trail horse....after a major diet and exercise program that is.  A friend fell in love with her and we worked out a deal.  He would own her, but she would stay with me.

When I added Tessa to my herd there was again, some initial trouble, but they eventually got along well.  They lived together peacefully for at least a year.  Last June, we took Sprinkle and Tessa on an overnight camping trip.  Sprinkle came into heat that day and spent the night surrounded by several very randy geldings.   Everybody made it through the night just fine though and returned home.  Everything was completely normal for several days until Tessa came into heat and Sprinkle attacked her.  It was a shock to all of us.  In all the years that I have had horses, I have never seen anything quite like it and I hope I never do again.  Whatever it was that triggered this aggression, I was never able to put Sprinkle and Tessa out together again without Sprinkle going after her.  I tried every treatment I and the vet could dream up, but it never worked and I finally told my friend that she had to go.  I'd had enough.

Sprinkle and Suki both live up in the Adirondacks now as Suki went with her to be a companion horse.  She had been my riding horse for many years and when I started riding other horses and leaving her behind, she got very unhappy.  Her knees were too bad to handle riding, but she hated being left out.  It was a hard decision to make, but I think she is happier where she is then if she had stayed here and been usurped by a younger horse.  It seems to have worked out, especially now that I have real hope for Tessa.