State of the Barn Address

The boys are both doing better. Yesterday was the first day of the new year that no one got any drugs.  I know, crazy right? 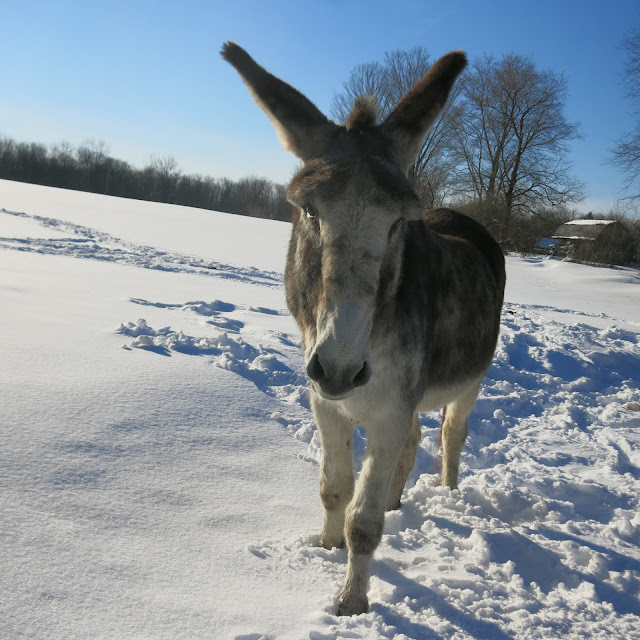 Ben is feeling like his old self.  He still shows some soreness in his right front because of the laminitic changes in that foot.  However, I doubt anyone but me would notice.  I trimmed the foot again this morning and brought the heel down another couple of millimeters and that has helped.  It will take 8-10 months of careful trimming for that to fully heal, but he is nearly 100% sound on it.  Considering that there were a few days last month when I came very close to making that last vet visit for Ben, I think he is doing very well now.

Meanwhile, he is happy and feeling good enough to be ornery about being locked in for breakfast this morning.  When he gets impatient, he kicks the back wall, which is not good for his leg or the wall.  He does not do it often anymore because every time it happens, I add an extra 10 minutes to his incarceration and refuse to let him out until he stands politely.  He is a smart fellow and he knows better, I take this morning's protest as a sign of good health.  Besides, it is hard to stay mad at him because he wants his freedom so he can come over to me and get his daily hug quota.  It is hard to be annoyed with a giant donkey who just wants a hug and an ear rub. 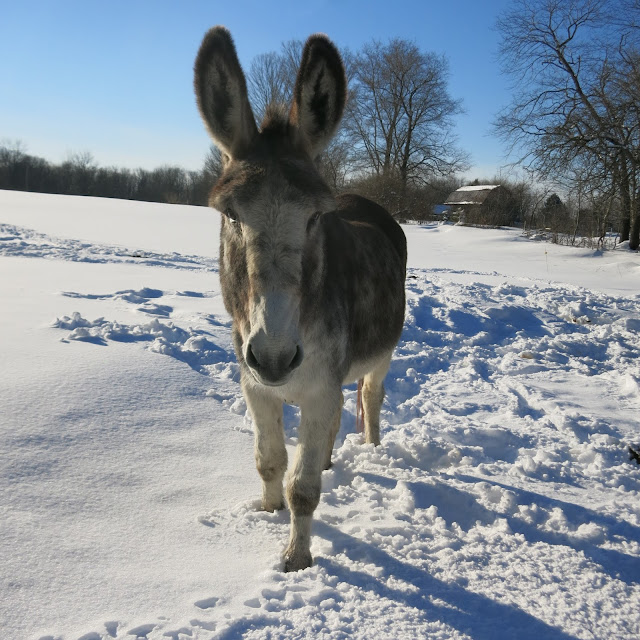 I had still been giving Ramsey Previcox every day as he was sore and short-strided without it.  After Ramsey had surgery when he was a baby, he had a lot of trouble with the tendon contracting in that leg because he would not use it.  To this day, whenever he gets lame on that leg and he stops using it fully, that tendon contracts again.  It happens in just a matter of hours and is why pain management is crucial for him.  Ramsey may be all grown up now, but inside, he is still the baby donkey who spent two weeks at Cornell. 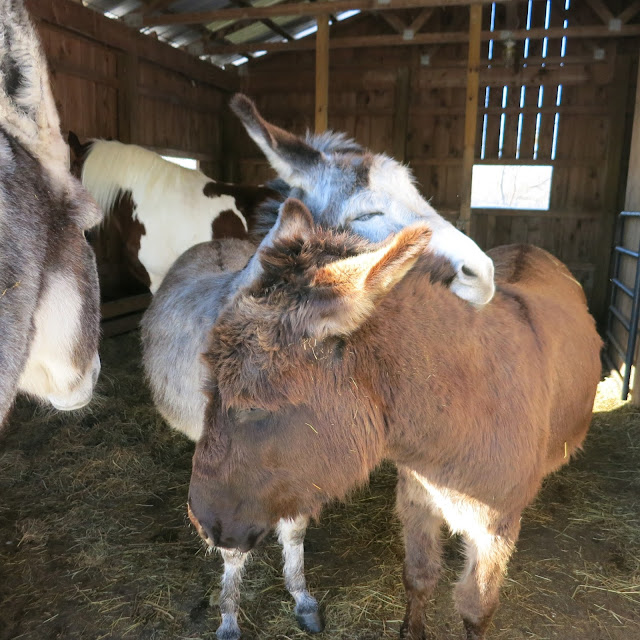 We have had a lot of cold, damp weather this winter and that really seems to bother Ramsey.  Today though, the sun came out and we had a glorious sunny day in the 40's.  I skipped the pain med and he did fine.  If he gets stiff again, I am going to try him on the turmeric paste once more as I hate to have him on pain medication for prolonged periods, especially at his age.  I suspect he will always need something to help in the winter months, but he is better.  Sunshine sure does help.

Ramsey is still not thrilled to have Ben around.  He has accepted it and they coexist well enough, but Ramsey would not mind in the least if Ben were to disappear.  I had hoped that Ramsey would like having another gelding around to play with, but mostly, he just feels like his home has been invaded.  He tolerates the occupying force, but he would still rather hang out with Mom. 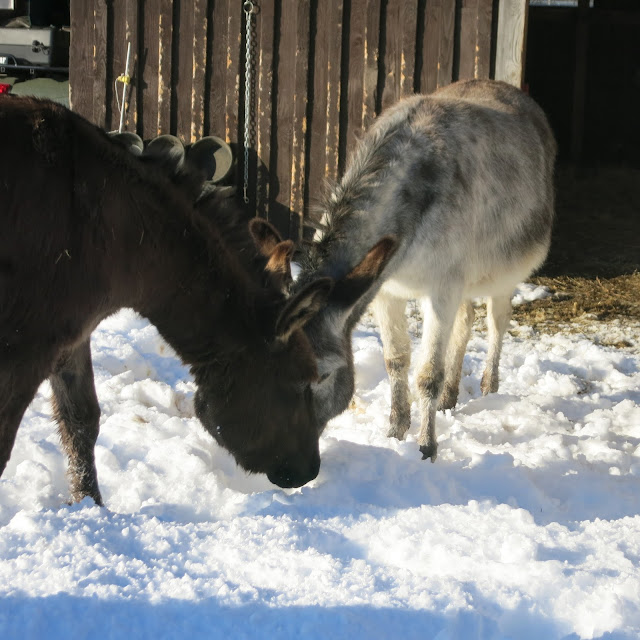 I don't think Ramsey will ever grow up.  Which is OK because I love him as is:) 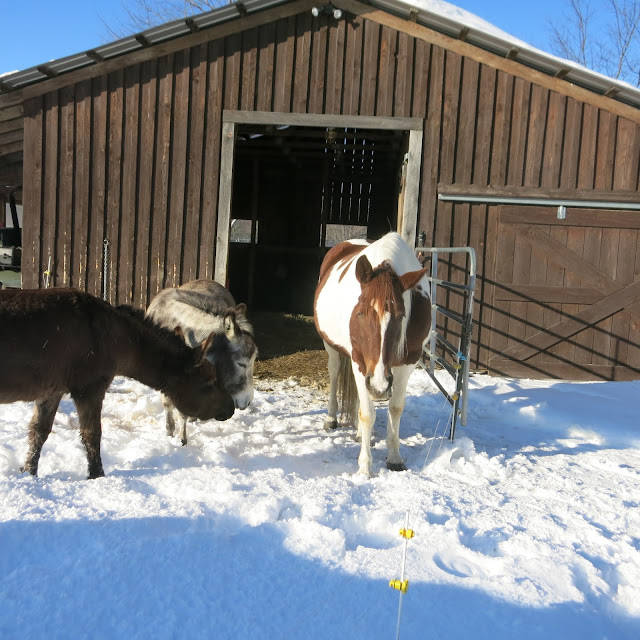 The girls are doing well.  Tessa is fine with Ben.  She loves her donkeys and Ben is just that much more to love.  She is a funny horse who generally lives in a state of semi clueless contentment.  She is entirely oblivious to the subtler donkey dramas going on under her nose and lives in a bubble of happiness that I often wish I could enter.  If I could bottle that, I'd make billions selling it as an anti-depressant.  She is also the herd defender though.  If she sees something that might pose a threat to her herd, she wakes right up and charges in to defend them.  Coyotes give my pasture a very wide berth. 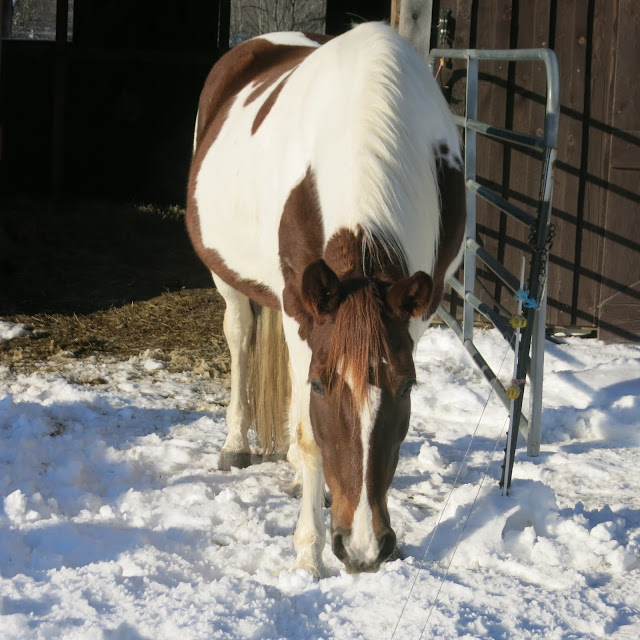 Emma is usually the bridge between Ben and Ramsey.  She has a somewhat hesitant friendship with Ben that both annoys and fascinates Ramsey and it often draws him in, if only so he does not feel left out.  Of all my animals, Emma has the most complex personality (well...she and Connor might share that honor).  She remains shy, thoughtful and wary, but is also the quickest learner and the bravest (and most stubborn) of the bunch.  Emma knows her mind and it takes a mighty effort to change it. 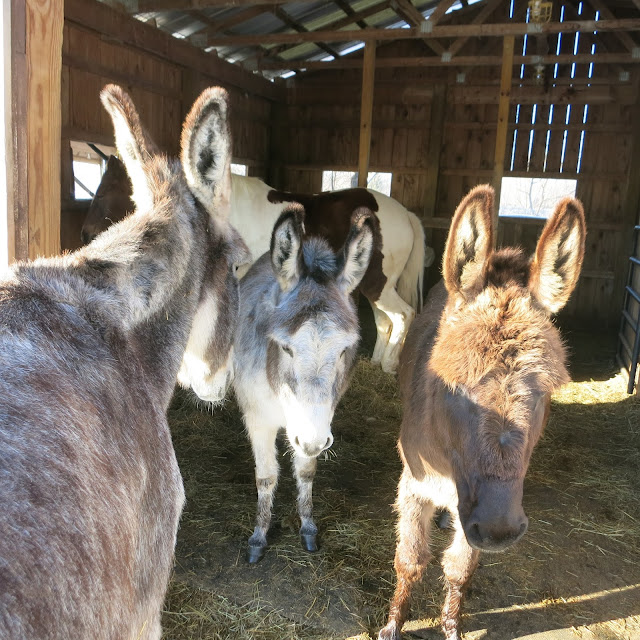 The herd are all finally doing well once again.

Me though - my nerves are shot, 2017 has already been a tough year.

Everyone agrees that this latest problem is definitely a tick borne disease, but it does not show up on a regular Lyme test.  It is either a strain of Lyme that the tests do not recognize or it is some other tick borne disease that we can't identify.  Ben was hit the hardest, but he has recovered. The tough part now is that this disease really exacerbated any underlying defect in the hooves and joints and that will linger.

Ben had some minor hoof wall separation in his right front foot when this started and that turned into laminitis.  Ramsey's right front foot is compromised because of his surgery and he has some arthritis in that leg as well.  This illness went straight for the weakest points and hit them hard.

There was a question about whether or not the Lyme vaccine I gave everybody was effective at all.

The answer is: I have no idea.

Will I continue to vaccinate them for Lyme?  Probably.  The data I have seen so far indicates that it does work in horses.

Does that mean it works in donkeys?  No one has any idea.

It may be that the vaccine did help.  Ramsey has a longer vaccine history than Ben and he was not as bad as Ben.  Did the vaccine help?  Was it because I caught it early?

Beats me.  Maybe the vaccine only helps Tessa and just makes me feel like I am doing something to protect the donkeys.  I don't know that either.  I also don't know what else I could do.

The vaccine does not cover all of the different strains of Lyme and it doesn't do anything for other tick borne diseases.  And that is what has me really stressed.  I feel like I am under siege and I have no way to protect my animals from an enemy that can't see or defend against.  That is a problem I see no solution for and one that is going to keep my barn on high alert.

Posted by The Dancing Donkey at 12:44 AM