I see it's been a while since I wrote a blog post.....not real sure how/why that happened other than too much happening too fast.  By the time I find time to write a post, it seems irrelevant.  I'm not sure how that happened either....

I do hope all of you are checking out the Instagram or Facebook feed as I have been posting lots of baby pictures there.  You don't need an account, just click on the little Instagram button on the side of the screen and you will get there.  I never understood the appeal of Instagram until I got my "not-phone", it takes seconds to do what takes hours (sometimes days) to do with the blog.

Anyway....let's see if I can wrap up the past few whirlwind weeks.

First off, there is my baby unicorn/dragon, Qilin, who is growing like a weed. 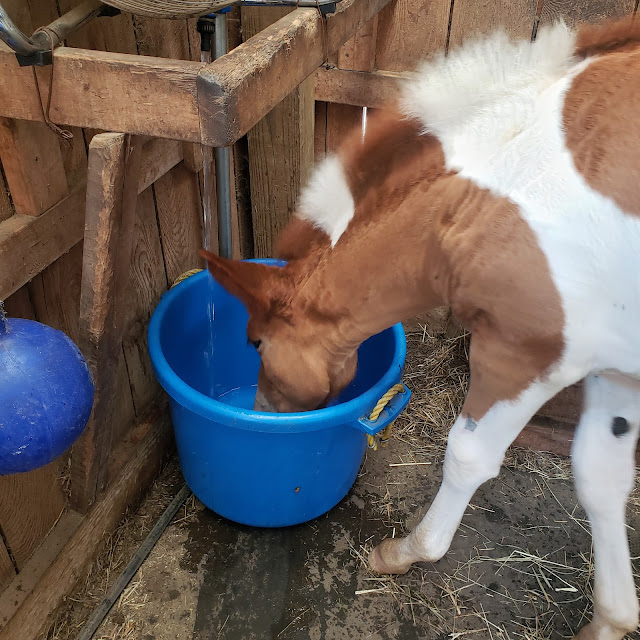 He is into everything and I am endlessly fascinated by watching his brain develop.  Babies are always fun and each one is different, but this is my first mule and he is very different. 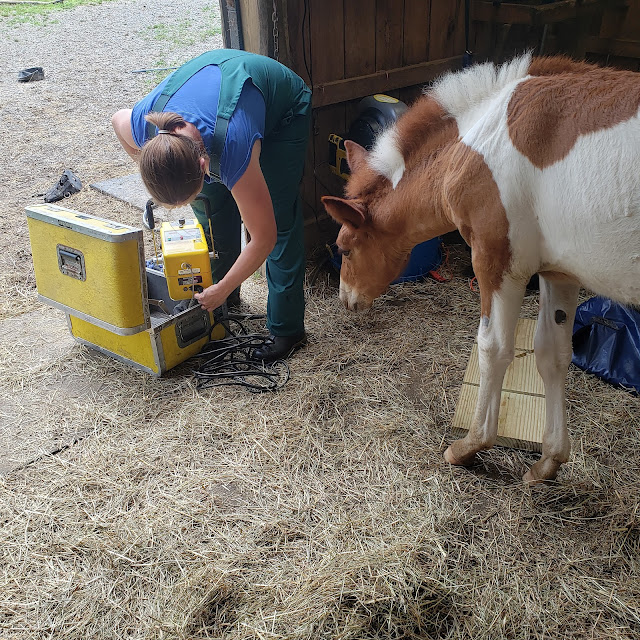 Qilin has moments of pure donkey, moments of pure horse and others that are uniquely mule.  If you are only used to either horses or donkeys, I can see where people might get in trouble with mules.  If you are going to work with them, I think you might be better off having experience with both species or none with either. 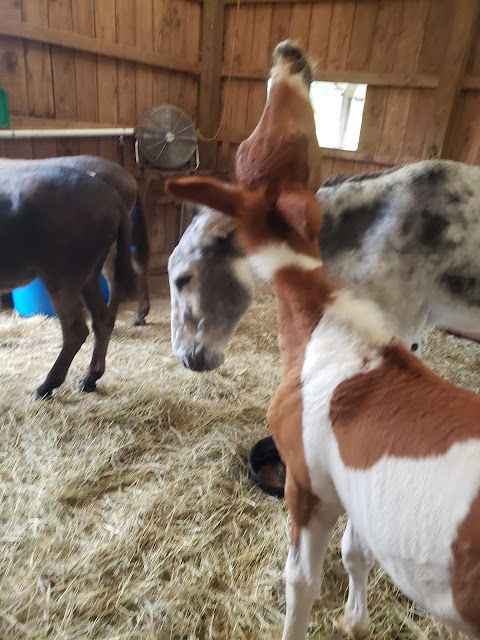 There is a bit of a special relationship building between these two.... 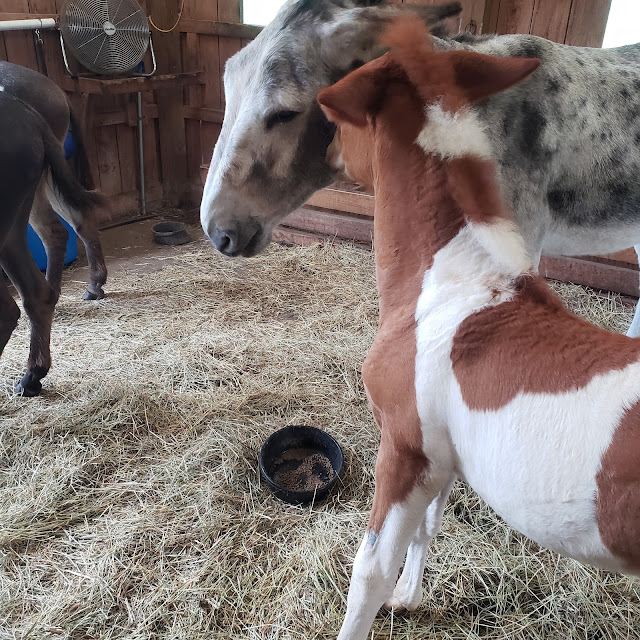 Albert and Ramsey are still unsure whether or not they want a crazy redhead baby joining their cool-kids club and Emma treats Qilin like the baby he is, but the Mighty Benjamin is looking like excellent BFF/uncle/babysitter/playmate material.  I couldn't ask for a better mentor so I am all for it. 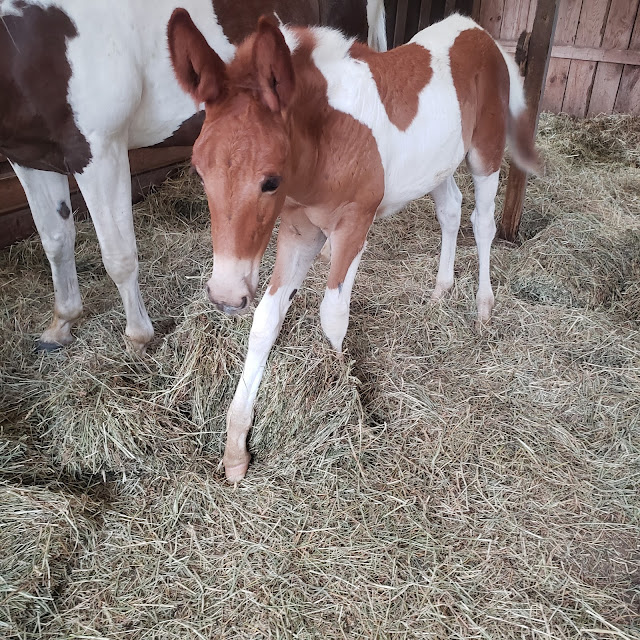 Here is a question for all of you....if I post pictures on Instagram, do you want me to post them here too?  There will be a bit of lag time and I may not write much, but do you want baby spam on the blog?

I do have LOTS of baby spam:) 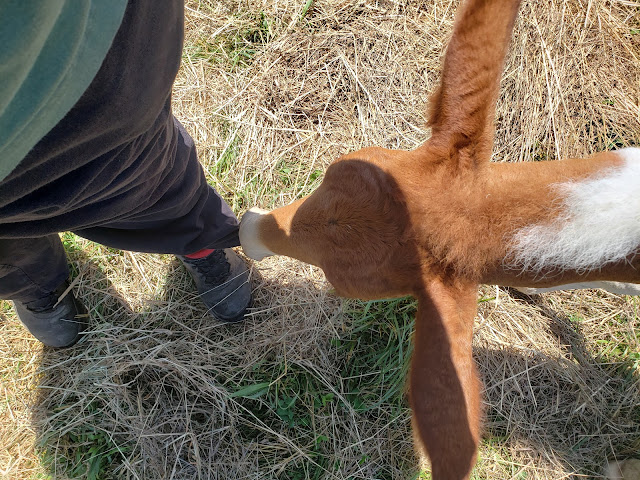 Lots and lots of baby spam:) 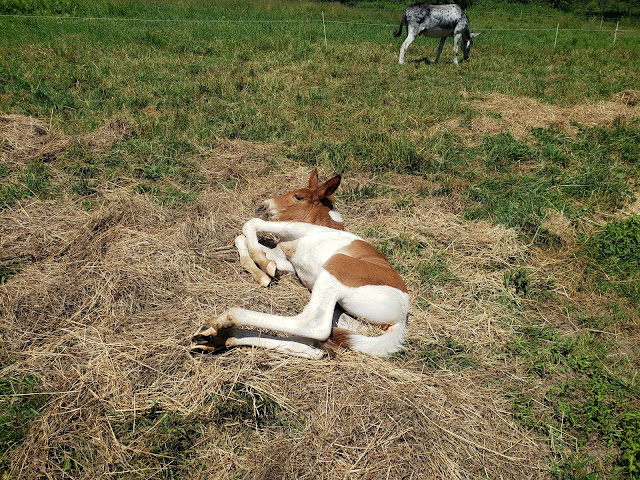 Aside from baby news, this happened last weekend, just after I stacked two tons of coal.... 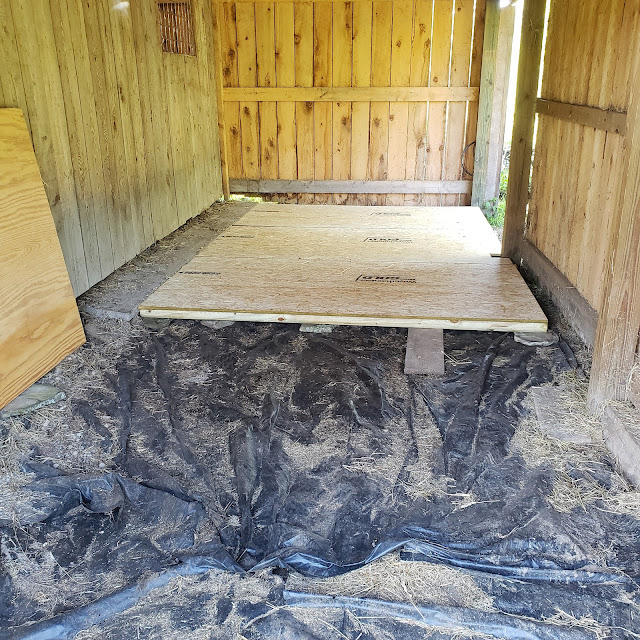 I've been meaning to put a real floor in my hay shed for ages now, but the timing has to be right.  I have to feed out the old hay, build the floor and then fill it up with new hay.  I thought a lot about how to do this job and finally decided to make each sheet of plywood a seperate, free-floating "pallet" that I can lift up one at a time and lean against the wall if I ever want to put round bales in here.  I can't drive the tractor on the floor so it has to be movable, but I wanted it solid so I don't keep twisting my ankles in crappy pallets.

I had the lumber scheduled for delivery last saturday (just after the coal) and my hay guy called me about an hour before it got here and said he had hay for me and could he "come right over?".  I begged him to wait a few hours I got just enough of the floor done so we could cover it with hay. You know when you have unexpected company coming and you run around like crazy trying to clean the house before they get there (if you don't know what I mean, you can't be my friend:)?  It was kind of like that only I had to strip the shed down to the ground and then build as fast as i could without dying of heatstroke.  That kind of day.

Super glad to have some hay in the barn though. 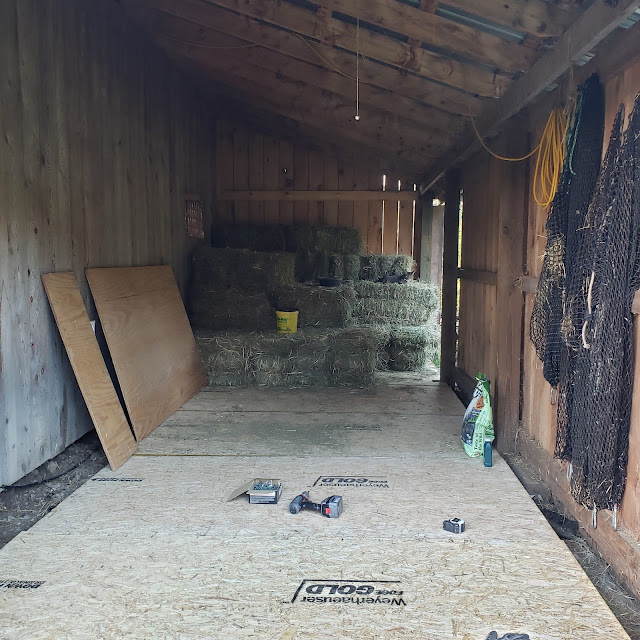 Over on the other side of the hill at Farm Buddy's place, Natural Borders Farm, there are more babies growing like crazy. 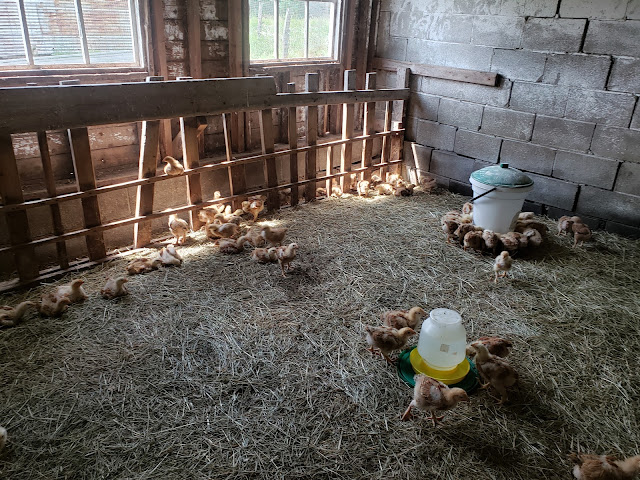 Crackhead Jane finally had her calf a couple of weeks ago and promptly disowned it, as she always does.  FB wouldn't put up with such a bad mom if Jane wasn't such a good milk cow.  Albeit a neurotic, oxytocin-addicted nutjob.  I believe those are the politically correct terms for a cow who freaks out at the sight of her own babies and instead fixates on FB as her "calf". 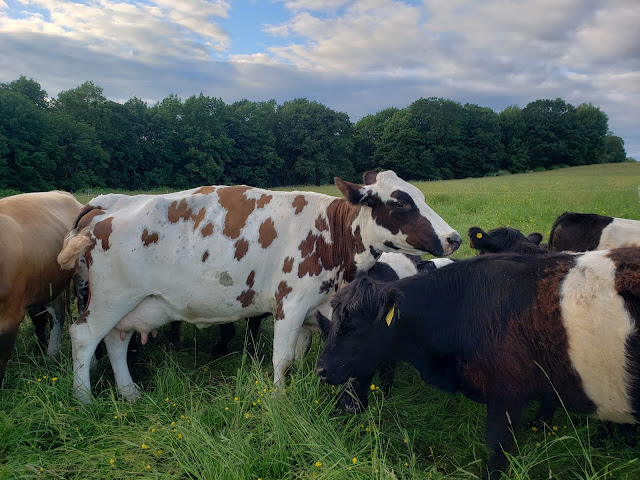 Her calf, June, is doing very well and is happy to slurp down gallons of mom's milk via a proxy. 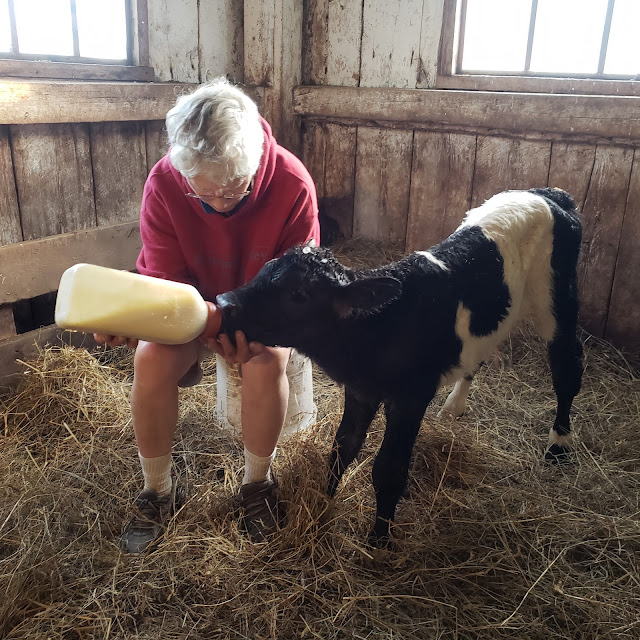 This year, the farm is covered with purebred Belted Galloway cattle.  From a distance, they look like an explosion of Oreos. 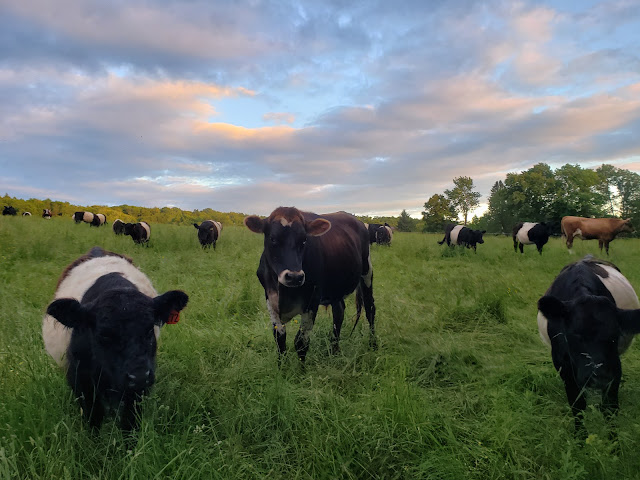 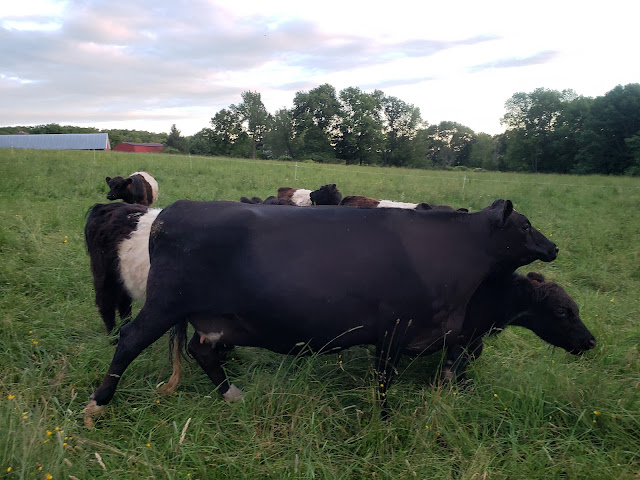 "You're not talking about me are you?" 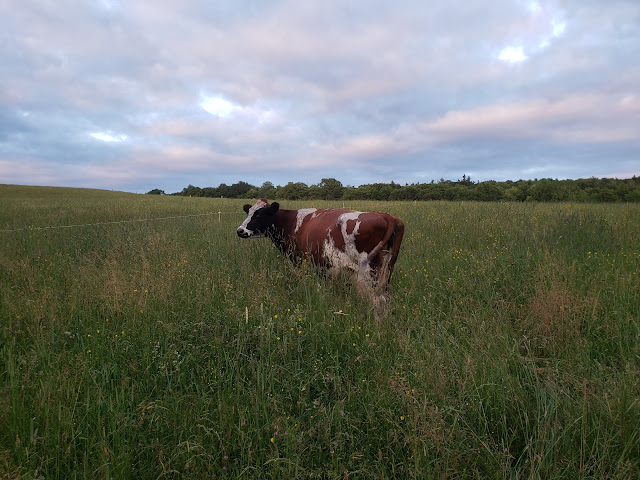 We have lost a couple of beef customers this year because they have been convinced that buying Bison is healthier.

The only thing that seperates Bison from beef cows is that Bison are generally raised in pastures, on GRASS, while commercial cattle operations finish the cows in feedlots on GRAIN.  Because Bison are raised on GRASS, their meat is healthier and the grassland is better for the environment.  Grasslands sequester as much carbon as trees and grazing animals raised on GRASS produce less methane, which totally negates the whole "beef is bad for the planet" nonsense (beef raised in feedlots is bad for everything.  I'm not letting the vegetarians/vegans off the hook either, because if you think a 10,000 acre field of soybeans, corn, spinach or kale is healthy, better for the environment or more humane, you are misinformed).

Cattle raised on GRASS, using intensive rotational grazing like we do, have the same benefits as Bison raised on open prairie.  Since we have destroyed nearly all of our open prairie in order to grow corn and soy, most Bison are just in big fenced pastures without the benefit of rotational grazing that they would do naturally if they could. Since they can't, these heritage Belted Galloways (or any cow raised this way) are going to be a lot healthier than the Bison some slick salesman has conned you into overpaying for.

If you really want to have healthy beef, that is good for you, good for the land and good for the planet you should buy it from a farm like this one. 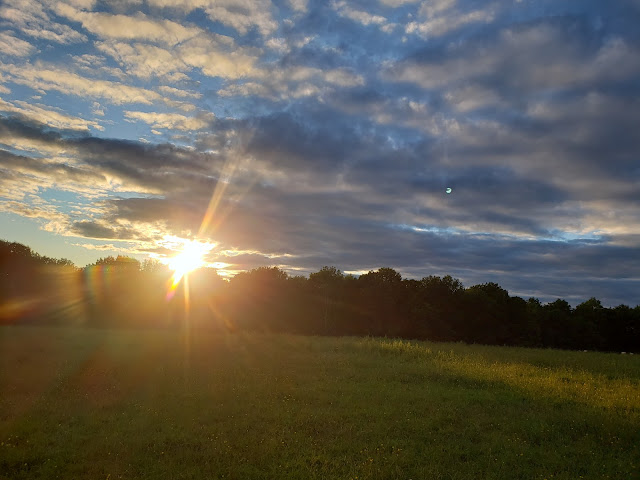 These farms don't get gov't subsidies, don't worry about idiotic tariffs because they only sell locally.  They are what our farm culture is based on and they are barely hanging onto existence because they can't compete with corporate agriculture and they don't get handouts.

We will have beef available this Fall if anyone is interested.  Send an email to Elva at gracyfarm@hotmail.com

By the way, there are no purebred Bison left, they all carry cattle genetics now because they have intermingled with beef cows that are overpopulating the last of our country's rangeland.  Yet another reason to stay away from corporate agriculture.  Go for the Oreos instead! 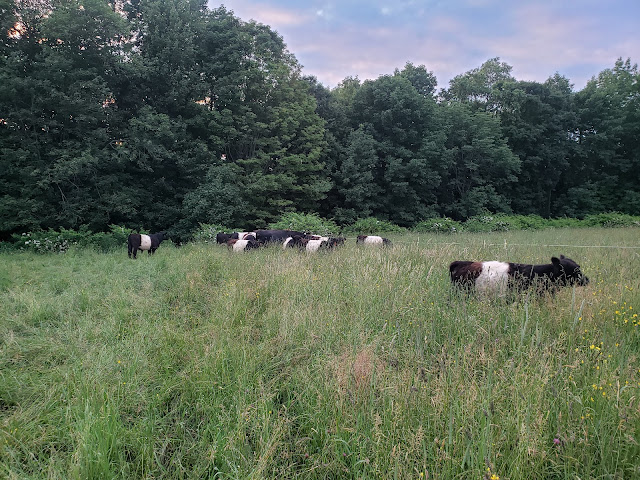 I thought I was done ranting, but not quite....these Three Little Piggies are refugees from a factory farm. 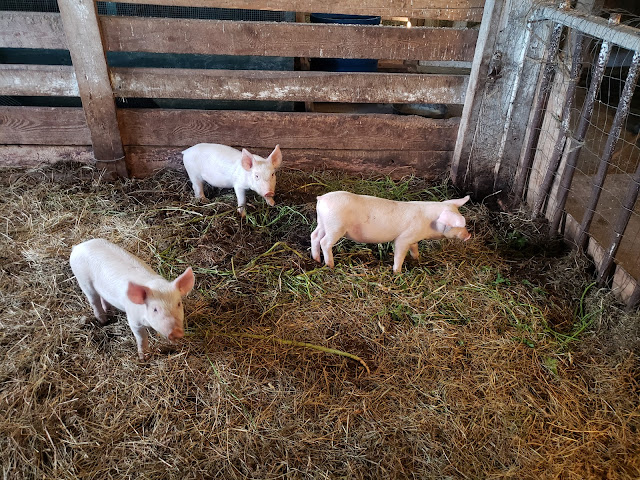 The guy we used to buy piglets from is out of business (not enough people supporting small farms) so we bought these guys from a guy who works for one of the huge pig factories.  If you look close at the photo you will see that their tails were cut off, their teeth were clipped and they were weaned at three weeks old.  Factory farms do that because the pigs are raised in such crowded, stressful conditions that they will mutilate themselves and each other.

These three factory rejects are the lucky ones.  They now have a 50 foot barn to play in plus pasture outside, deep bedding, toys, milk from Crackhead Jane and four meals a day. 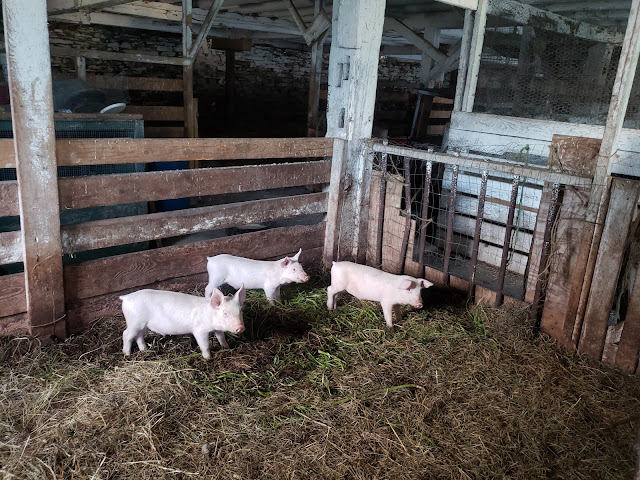 Maybe that is why I am finding it hard to blog lately....I try to keep this a positive place, but I have a number of rants brewing and they are crowding out the rest of the words. 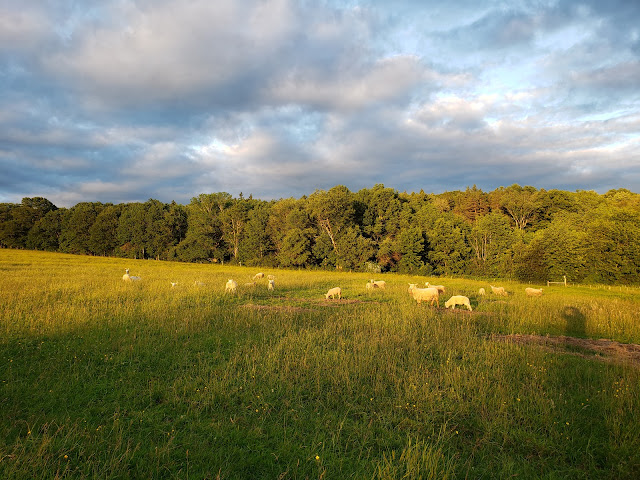 I think I only got through half of the "news", I will try to write more tomorrow.  Try to be nice to each other, it is all too rare out there in the "real world". 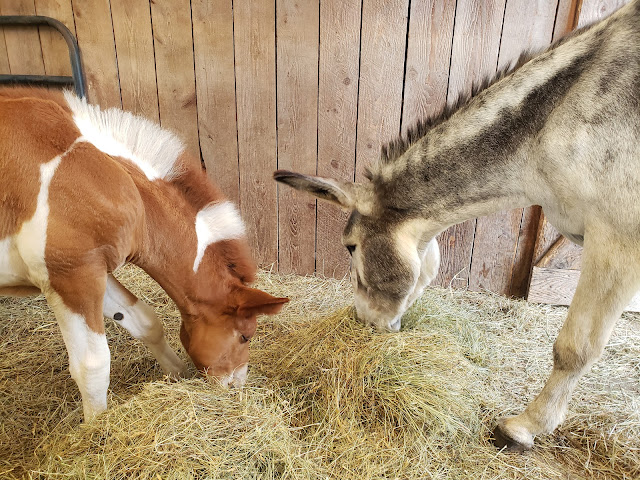 Posted by The Dancing Donkey at 1:47 AM