It's finally Spring on the farm, my favorite time of the year.  It is also the time of year when we all look around and take stock and see what the winter has left behind. 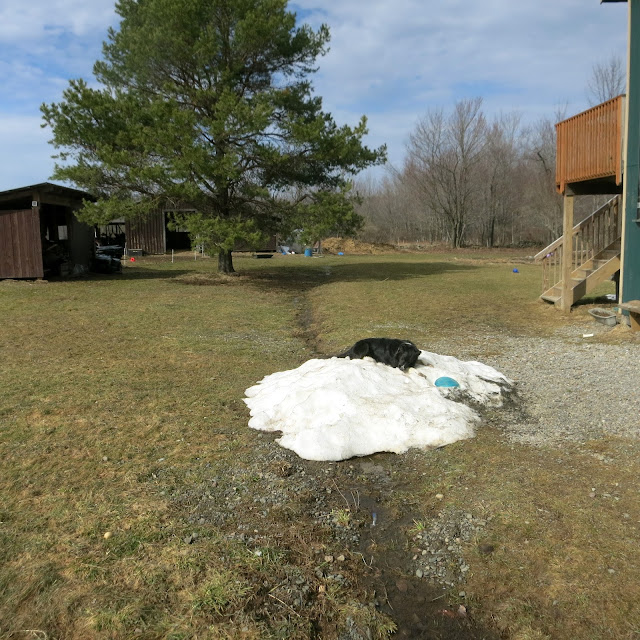 The ice finally went off the pond on April 5th.  It had been frozen over since mid-October and I have been concerned about the fish I put in there last year - that is a long time to go without fresh air or sunshine. 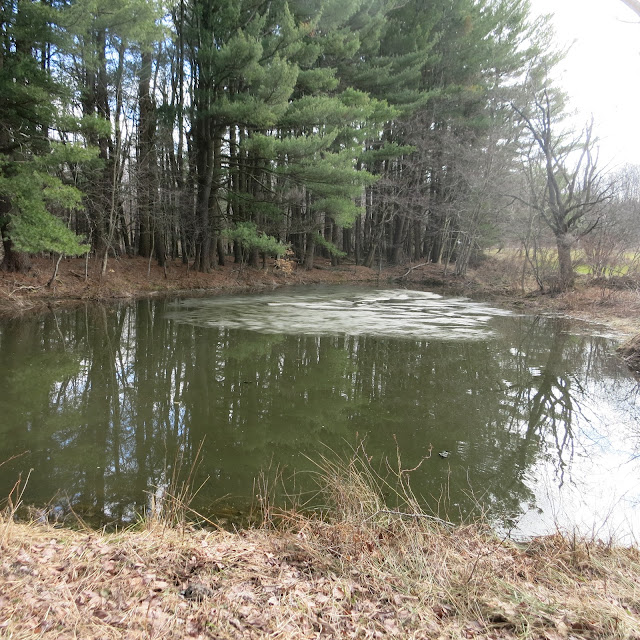 I am happy to say though, that I have spotted all six carp and have not seen any sign of the catfish, which I am taking as a good thing.  No one came bobbing to the surface when the ice melted so I am going to assume that the catfish are still happily hanging out on the bottom of the pond.

The carp had some white patches on their backs, but a couple of days with sunshine and no ice and the patches have already disappeared.  I am assuming it was some kind of skin condition caused by lack of sun.  They have made it this far though, so am also assuming they are fine.  Which is just as well as I would have no clue how to help them if they weren't fine. 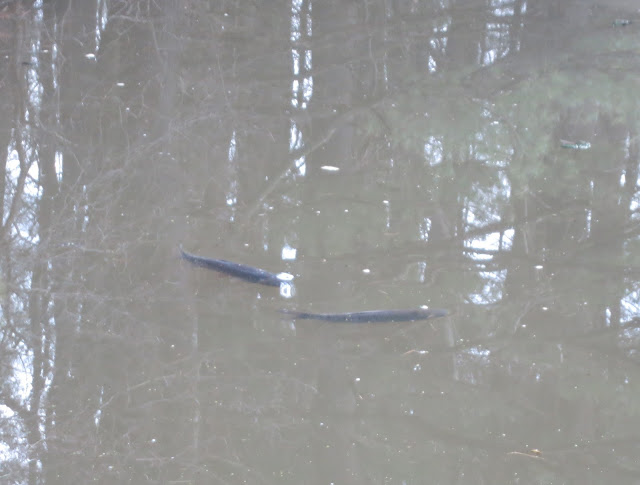 I finally saw the first turtle yesterday afternoon.  I was glad to see them as I was a bit worried that they might not get along with the carp.  I think they are just holding out for more sun though.

The beehives are not to bee.  The bees disappeared from one of them very suddenly last August.  They had lots of room, bees and food and then they were just gone.  The other hive, which was super strong in the fall, never made it to the new year.  I was going to write about it, but then Ben got sick and then Ramsey and etc, etc....

The hives are still out in the field, full of honey and I have not been sure what to do with them.  For now, I think I will continue to ignore them.  Wild bees will come and steal the honey, which is fine with me as it is un-salvageable at this point and will do them good.  Who knows, maybe a swarm will decide to move in.

But I am done.

I am going to sell off what equipment I can salvage and my beekeeping days are over for as long as I live on this hostile hill.  I have heard that most NY beekeepers suffered a lot of losses this winter, but this was one loss too many for me.  It's just not to bee.

Connor is doing well despite the fact that he had a vet appointment last week and tested positive for Lyme.  He is vaccinated and I have consistently used Vectra on him to guard against ticks, but it was not enough.  Nothing is enough.

I think it is going to be an especially bad year for ticks as we had a huge explosion in the mouse population last year and mice are the greatest carriers of ticks.  Every mouse routinely carries 60-80 ticks and there is no good way to get rid of mice.

And please don't tell me to get more cats.

I already have Kipper and there are several cats from the neighbor's that routinely hang out in my hay shed.  They leave me "presents" of dead mice in my tack room - dead mice, heavily infested with ticks who then go looking for the nearest warm body, which is always going to be me, Connor or one of equines.

I tried guinea hens, and they didn't last a single season.

I am finding 20-30 ticks per day on the donkeys no matter what nasty chemical I use to prevent them.  It is a hopeless battle and neither the cat or chickens (or guineas, chemicals, or mousetraps) seem to be helping much. 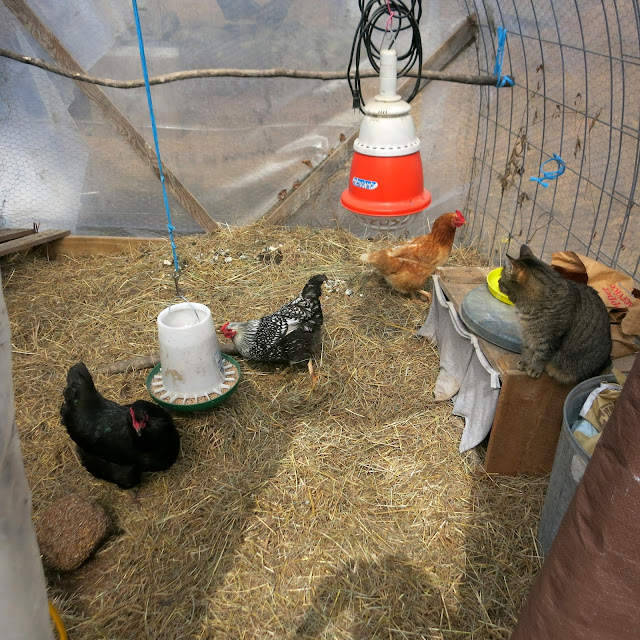 The red hen was sick for a few days and I thought she would die, but she got over whatever it was and is doing better now.  I've always wondered if there is something a bit wrong with her though as her feathers always look moth-eaten and the other hens often shun her or pick on her.  I have found that chickens always know when one of the flock is not healthy and they ruthlessly go after any weakness.

I wonder if chickens get Lyme disease?

Tessa and the donkeys are all doing well now, although they are all losing the battle of the bulge.  I have already put them on their pasture track and taken away all the grass, which they are very annoyed with.  Now that the weather is warmer, I am also soaking their hay to leach some of the sugar out of it. 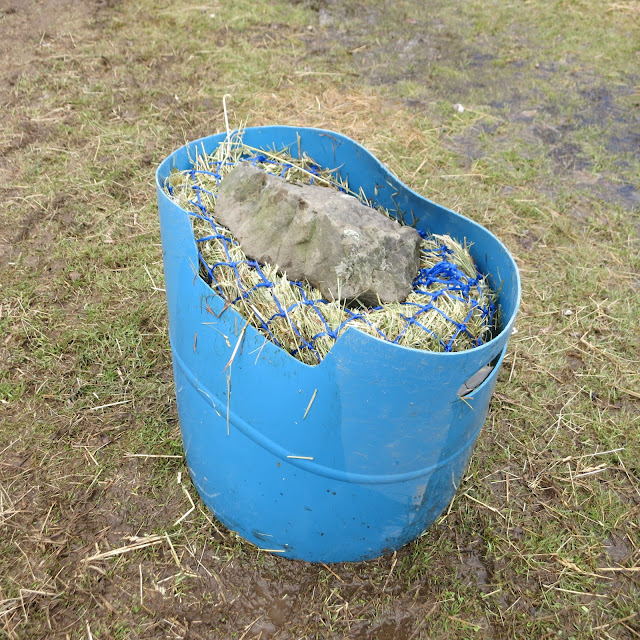 Soaking hay for a whole herd is a massive pain in the ass, but my asses are all getting alarmingly wide so it must be done.  Surprisingly, they don't seem to mind eating soggy hay, which is good since they are so mad at losing access to all the pasture. 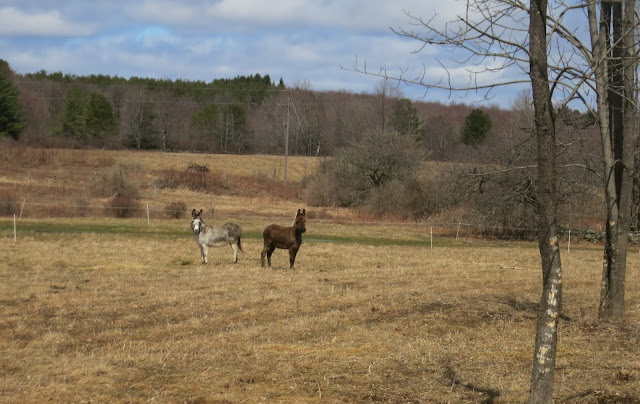 As for me...I have not been feeling well for a while, but I have just made an adjustment to my thyroid medicine and, hopefully, that will help.  I might even be able to do more than stare stupidly at the computer when I sit down to write a blog post.  That would be nice.  At least it's Spring, which makes everything better.

Posted by The Dancing Donkey at 12:34 AM