We finally got to Ramsey about mid afternoon.  At first, Pete looked a bit disappointed about Ramsey as he was itching to get to that poor jenny in yesterday's post.  He wasn't so sure that there would be much to talk about with Ramsey, but I told him that he might just have a surprise for him.  That seemed to cheer Pete up.

(For anyone who is new to the blog, here is one of Ramsey's previous radiographs showing what his coffin bone looked like after having surgery at four months old for septic pedal osteitis (an infection of the coffin bone, also known as p3).) 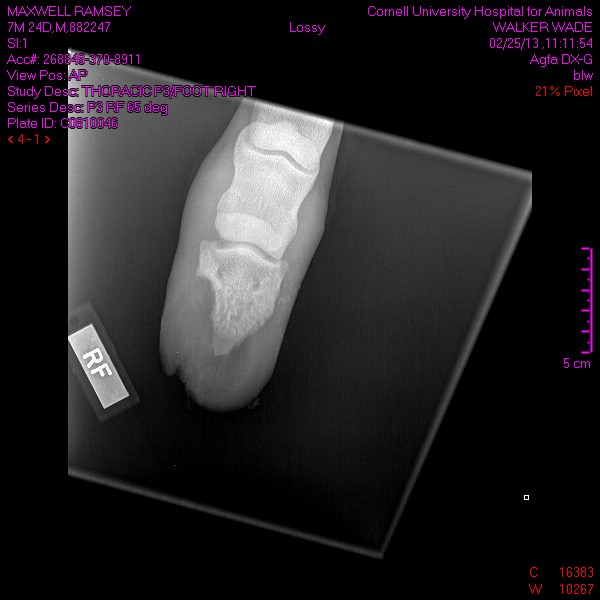 After describing Ramsey's history, diet and environment, Pete immediately wanted to see a new set of radiographs.  Luckily, there was a vet able to do digital films right there for just that purpose.  While we were waiting for them to set up, he took a look at Ramsey's feet and his first impression was that the sole was too thin and he was unhappy that someone had "rasped' his toe off at an angle. 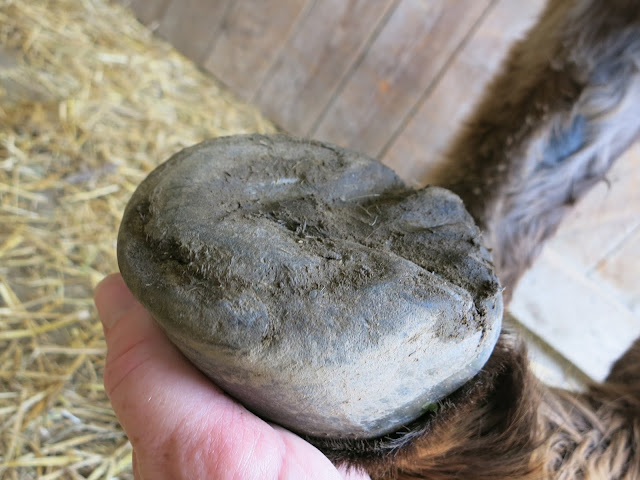 I am not sure that Pete actually believed me, but NO, I do not trim his foot this way and I did not rasp the toe off.  Ramsey manages it all on his own by digging craters in the pasture.  It is one of his favorite summertime pursuits.  If anyone has any idea about how to stop him doing this, I would certainly like to hear about it.  He never does it when I am around, but I see him doing it from the house.

Ramsey digs holes, almost exclusively, with his bad foot.  I often wonder if it is a sign of pain or odd feelings in the foot as a result of his surgery.  There are a lot of nerves in the foot and many of them had to have been disrupted when Cornell removed a third of his coffin bone.  Ramsey often acts like there is an itch in the top of his foot and will bite at his hoof occasionally.  Then again, maybe he is just right handed and he likes being an excavator.  Only Ramsey knows. 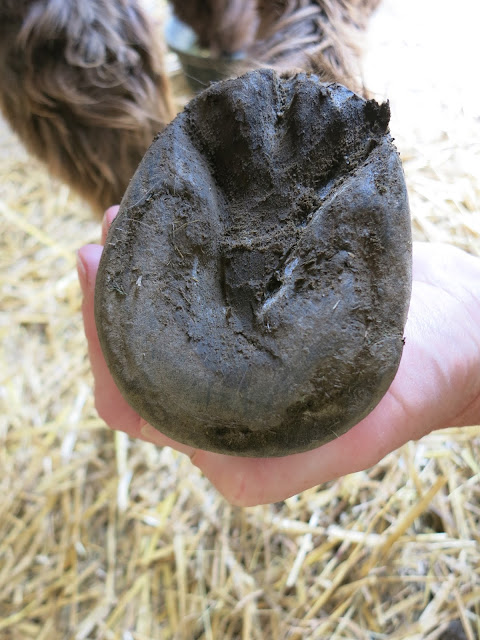 Finally, we got the new films (which I don't have unfortunately.  I am trying to get copies and will post them if I do) and these told a rather different story.

One of the things I struggle with the most in trimming this foot is that the external guides that would normally show how much sole there is just don't exist here.  It ALWAYS appears that Ramsey's sole is paper thin, and I ALWAYS have to take a deep breath and commend my soul to God before taking a knife to it.  It was one of the things I was hoping to get out of this clinic - some secret that my near obsessive study of hooves has not yet revealed to me.

The x-ray showed that, despite what it may look like on the outside, Ramsey has a full 1/2 inch of sole depth and his medial/lateral balance was near perfect.  In the end, Pete did not trim Ramsey's feet at all.  What he finally had to say about Ramsey was this:

"It is really amazing just how normal the foot looks, I wouldn't have thought it would be possible."

"This donkey needs a lot, but there is not a single thing that I can do for him that you aren't already doing." 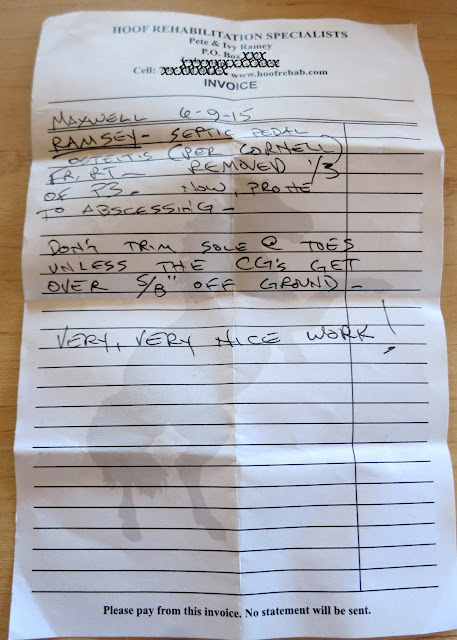 So there you have it, I guess all that obsessing really did pay off. 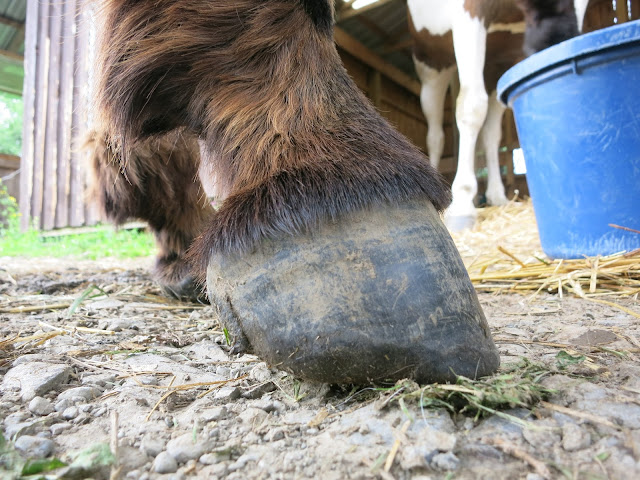 In the end, the one thing that I got out of this clinic more than anything, is a sense of validation.  I am not ever going to even try to figure out how many hours I have spent studying feet and trying to talk to farriers.

For a very long time I really felt like I was out in the hinterlands trying to reinvent the wheel.  My attempts at getting local help were generally an exercise in frustration.  The farrier at Cornell told me I could bring Ramsey in for trimming every 3 weeks (not possible), but he couldn't help me and he didn't think that Ramsey would ever have anything like a normal foot. 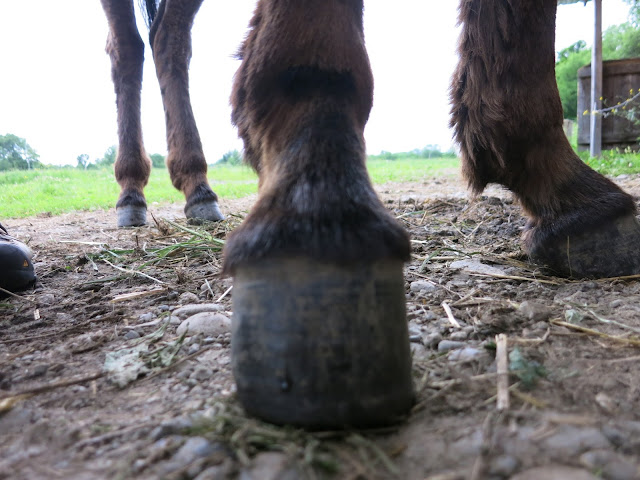 A year ago, I had a saddle for sale and a professional farrier, who graduated from the top farrier school in the country and who also had 7 years of experience, called me up about it.  I told him I'd trade him the saddle in exchange for trimming lessons.  He came down, we talked about Ramsey and all the other feet I was working on at the time and he got real quiet for a long time, just staring at Ramsey's foot.  Finally, he shook his head and told me:

"I guess I didn't really hear what you were telling me on the phone.  I thought I was going to come down here and say 'this is a nipper and this is a hoof knife and this is how to hold a rasp.'  Instead, I am totally out of my depth here and I don't have a clue what to do for your donkey or the other horses you're working on."

I still gave the guy a good deal on the saddle because he'd lost all his equipment in a barn fire and I felt bad for him, but I quit trying to find help after that.  In fact, that was about the time that I made a conscious effort to stop studying books and videos or look for external guidance of any kind.  I put all the books away and I took all that stuff swirling around in my mind and stuffed it into an imaginary box inside my mind and closed the lid.

It's all still there of course.  That box is now a building block that is an integral part of my hood care foundation, but on it's own, it can never be more than a house of cards.  It is each and every individual hoof that have been the real teachers.  I couldn't have done it without that solid foundation, without Pete Ramey's DVD's, but in the end, it was Ramsey himself who taught me how to trim his foot.

People kept coming up to me after the clinic and saying things like, "wow, you must be really happy" and, being the socially inept nerd that I am, I wasn't sure how to answer this.  Yes, I am very happy.  It's a bit like acing the hardest exam I've ever taken.  But, it took a while to sink in and there was this little part of me that that kept wanting to say, ' but wait, we haven't found the secret yet!'.

There is no secret of course, except the secret that every hoof is waiting to tell.

I am very glad that I took Ramsey to the clinic, although I am sorry that it stressed him out.  If I hadn't taken him though, I would have always wondered and regretted not doing it.  I feel good about where we are and about the feedback I got from Pete.  At the end of the day though, this is the thing that makes me feel the most triumphant....