I'm liking my new cellphone camera, which I have taken to calling my not-phone because it does everything except make phone calls:)  It's a good thing I bought a good case for it since in its first week it got dropped, rained on, stepped on by a dog (twice in 1 minute), slobbered on by said dog, licked by a horse, covered in hay-chaff, splattered with pig slop (the rest of which went down my bra because - where else would it go when your best friend accidently throws a pan of pig food at you?), and smeared with birthing fluids.  Just a typical week in my world. 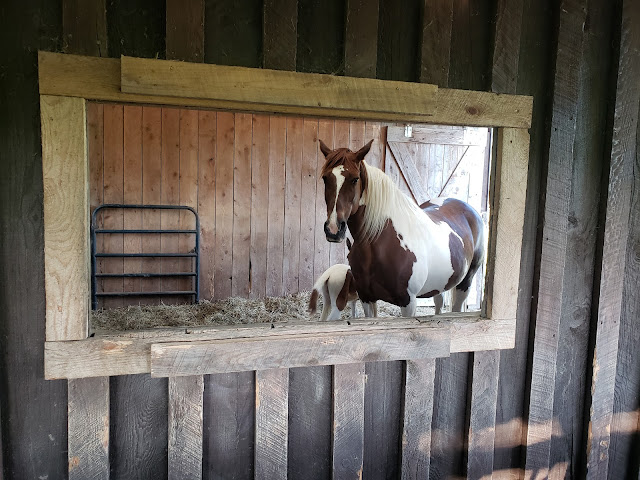 My friend Dave fixed a bunch of equipment for me and brought it back over yesterday.  He also brought a couple of round bales with him as a baby gift from him and his wife.  Now THAT is my kind of baby gift (or birthday, Christmas, random day in July...)  Thank you Dave and Glenda, it is much appreciated as is all the great work on my mower, it has never worked better.

The donkeys also send their thanks. 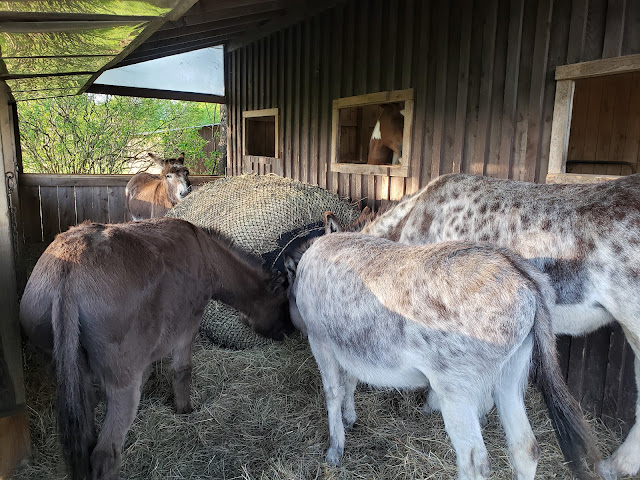 They have not gotten to meet the baby yet except over the fence and they have been relegated to the "sunroom" for the duration so they have been a bit miffed with me.  Not to mention jealous.   Nothing like a huge bale of food to cheer them up though. 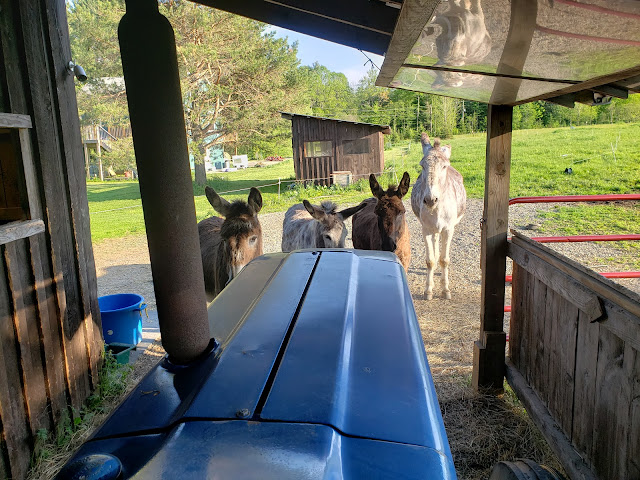 As for Little Mr. Mule...I have been trying and trying to give him a name and nothing sticks to him yet.  I have a list of names I like, but I just can't seem to find the right one.  It seems to be getting harder and harder to name new animals in my life and I think it is a sign I am getting old.  I don't like to reuse names or use names associated with other people/animals/strong emotion....in a life filled with animals, that rules out a lot of names. 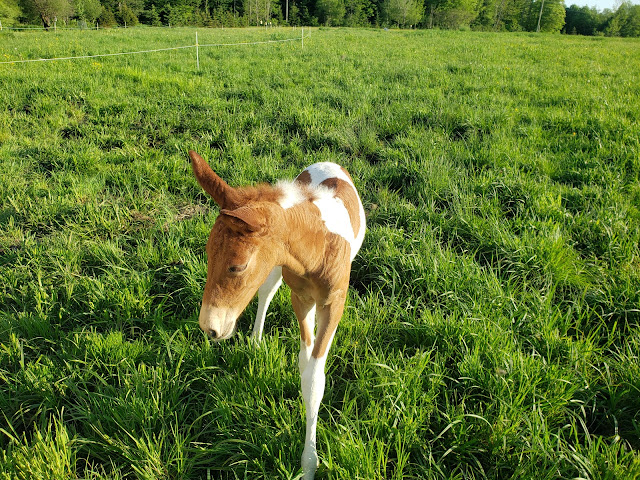 I think too, that it is because this guy's personality is hard to read.  He mostly acts like a horse foal, but then there will be little flashes of pure donkey.  I am finding it very fascinating to see the differences in working with a hybrid vs. working with either a horse or a donkey (or calf, lamb, pig, etc. for that matter).  All animals are different, with distinct personality, but those distinctions fit inside the shape of the species. 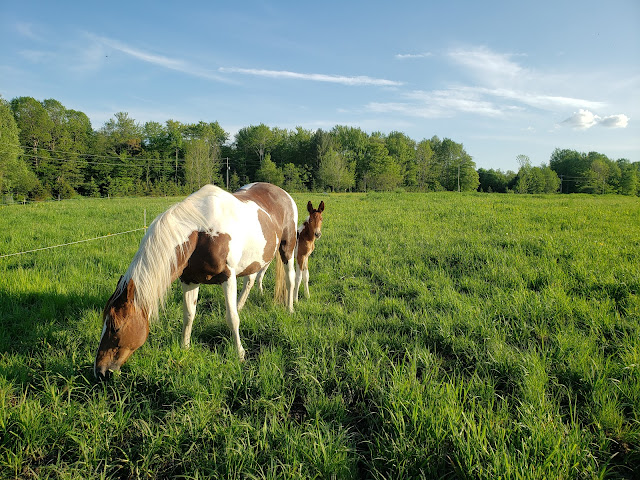 Little no-name here flits between horse, donkey and something that is uniquely both. All three make up a beautiful/silly/smart/sweet/friendly/shy/devilish baby mule. 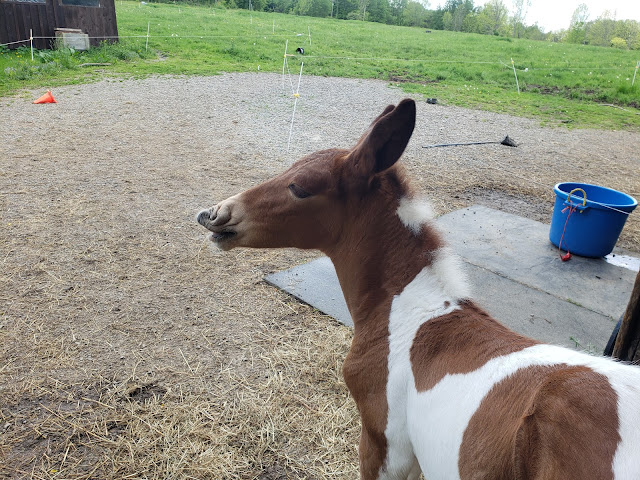 Tessa and I are having a lot of fun with him. 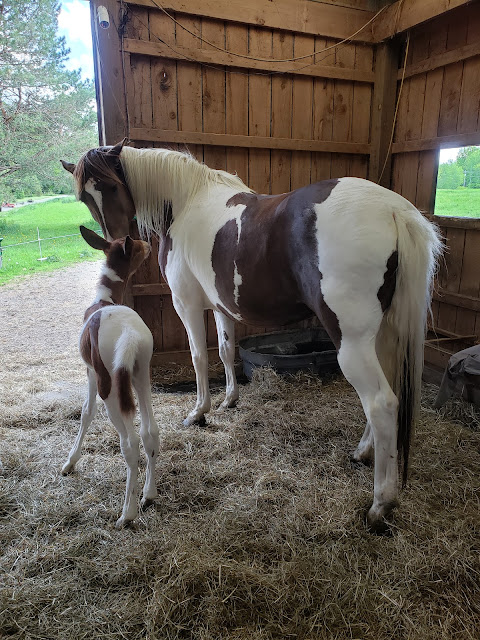 I just can't figure out what to call him because this side says: Troubllllleeee... 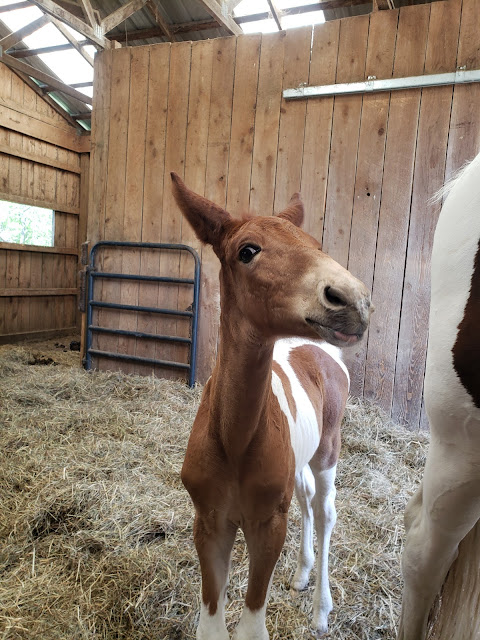 ....this side says: You could give me a kiss or scritches or I could run away and join the circus... 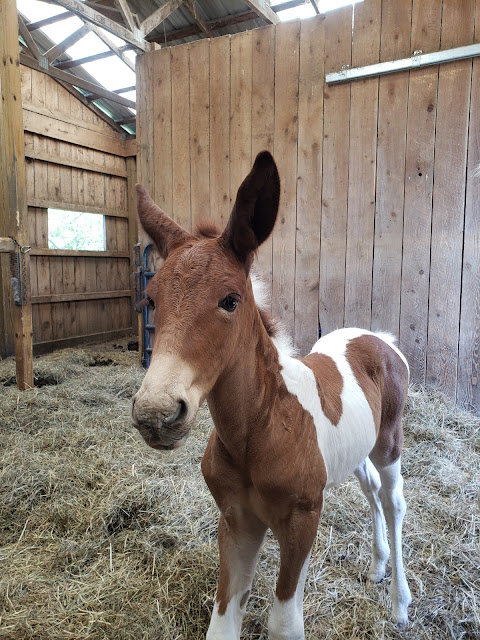 ...and this one wants to know what you are doing, why you are doing it and what is the square root of Pi.  And what is Pi anyways?  Is it as good as MILK??? 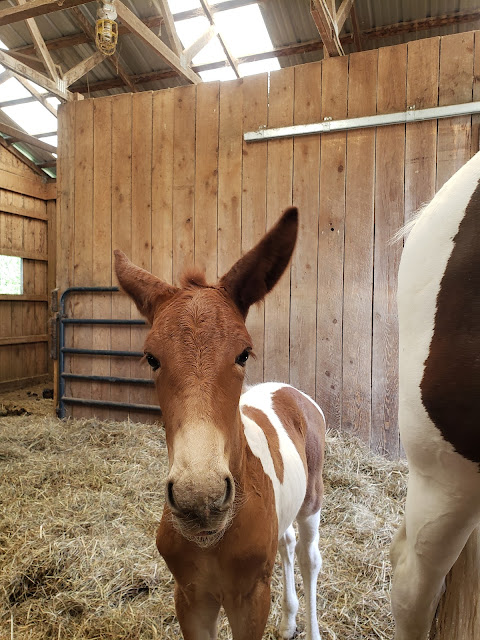 Some of the top name contenders at this moment are: Liam, Walker, Cade/en, Zephyr, Keiran (because he makes me think of dragons, but not Game of Thrones dragons, because I read most of those books and finally gave up because I just wanted to dope-slap the damned author.).

Want to vote?  It's OK if you don't like any of the names, but you have to offer a suggestion if you want to vote for something else:)