I have had some interest from several people wondering how I made out this year with my slow feeder boxes and hay nets.  So, after using them all winter this is my opinion, based solely on my experiences.  I have no affiliation with any of the sites mentioned.

Like many people this year, making every bale of hay count was paramount.  We were luckier than a lot of places and had an OK hay crop last summer, but our yields were far, far below normal.  Farm Buddy actually sold off a good portion of the beef herd last Fall because there wasn't enough feed for them and buying more wasn't an option. Fortunately, the whole group went to a another grass-based farm and are all doing very well.  That is an extreme rarity for cattle.

In spite of all of my efforts, I was just a bit short this Spring and had to buy a few round bales to get the horses through to the green grass.  They weren't exactly upset about it at the time. 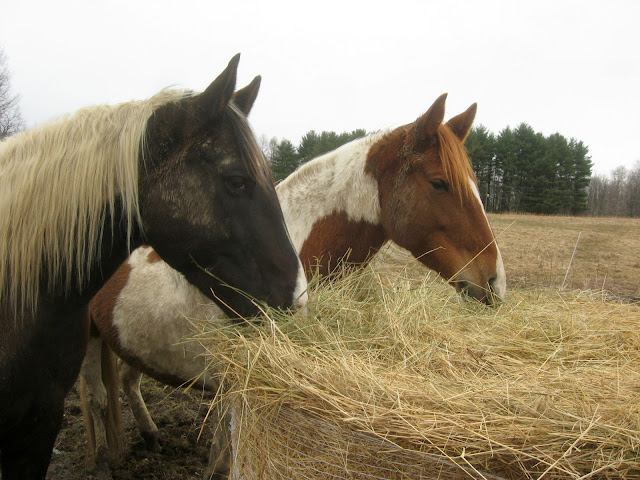 In my quest to make every stalk of hay count, limit the amount of food these fatties put away and keep Emma and Ramsey happy during Ramsey's convalescence, I have done quite a bit of research and experimenting with different slow feeding methods.  I have written about small mesh hay nets before (click here for that post) and I have become quite a firm believer in them.  In fact, I kind of think they may be one of the best things to happen to modern horse keeping in the past several centuries.  The health benefits and contentment of the animals are so obvious, I don't know why we didn't think of this sooner.

The two versions that I have found to be the most useful for the horses are, first, these cheap, rugged sort from Chicks.  They have 2" holes and are a good choice for coarse hay or if you want to slow, but not limit, consumption.  They hold about half a (30#) bale of hay each, are very tough (Gabe tested this feature extensively), can be tossed directly on the ground for 'natural grazing' or can be tied, in the barn or into my hay boxes, during muddy/extreme conditions.  And, they are only $8 each.  They can also be doubled up if you want to further slow or limit consumption.  I DO NOT consider them safe for my smallish donkeys or minis though.  The holes are the perfect size for Ramsey's foot to go through. 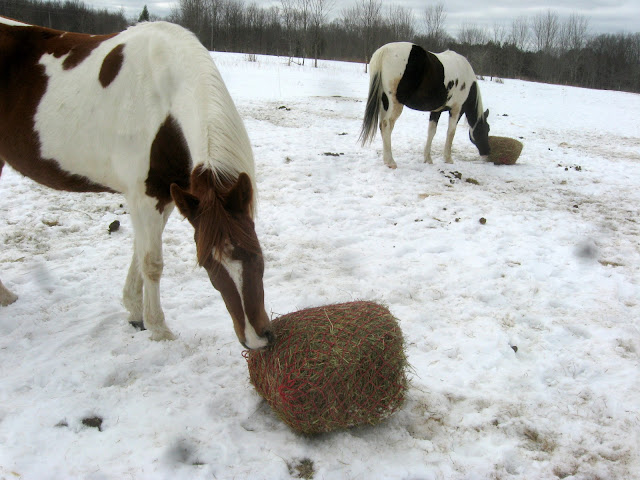 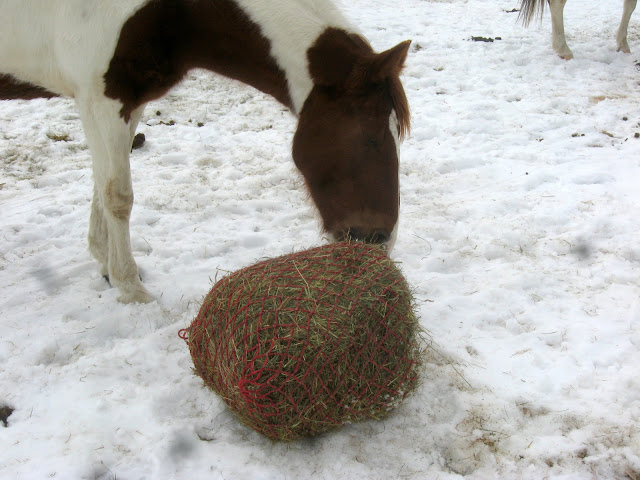 The other version of hay nets that I really like are at the opposite end of the spectrum and are the only nets that I have found that I feel are really safe for smaller animals.  This is a bale sized net made by ChinchChix, they come in a variety of sizes from very small to round-bale size.  There is another version available in Canada called NagBags that I have heard good things about and are probably an equivalent, but I have not tried them myself... 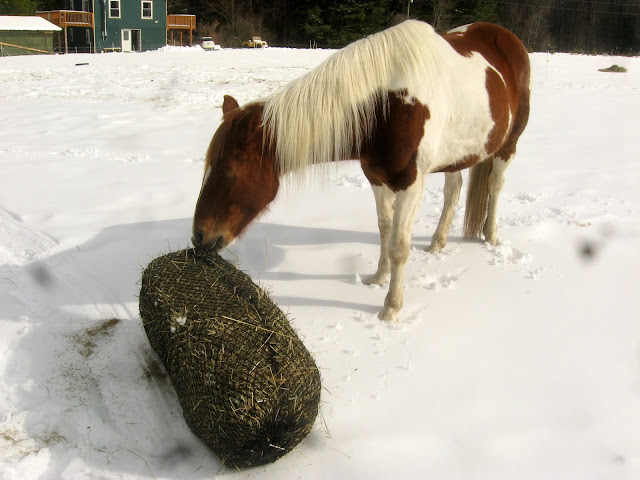 These suckers are expensive so I would not likely have tried them if a friend had not given one to me as a gift.  I lucked out when another friend later sold two more of them to me at half their normal price.  The cost is my only complaint about them.  The two that I bought have 1" holes for extreme slow feeding (which is only suitable for fatsos eating rich hay, like Gabe and Tessa or for minis).  They worked out great for my fat horses.  I was able to considerably cut down on the amount of food they were eating while still providing hay 24/7.  I also only had to fill them once a day, which was a HUGE time saver for me.

I still think they are overpriced, but I guess you get what you pay for.  They are far superior to the other nets I have tried and when these finally fall apart (hopefully a long time form now), I will probably buy more.  They do take a lot of abuse and are still in perfect condition.

The one that was given to me as a gift has 1.5" holes, which is the right size for general slow feeding and are safe for smaller critters like Emma and Ramsey.  This was given to me long before I got the other two and I gave it to the donkeys as it IS safe for them.  They absolutely love the net and choose it over loose hay every time.  It was also a huge time and allergy saver for me as well.  One bale in the net lasted 3-4 days for my two donkeys.  And speaking of allergies, Emma and Ramsey used to have watery eyes quite often, feeding out of the net, they never do. 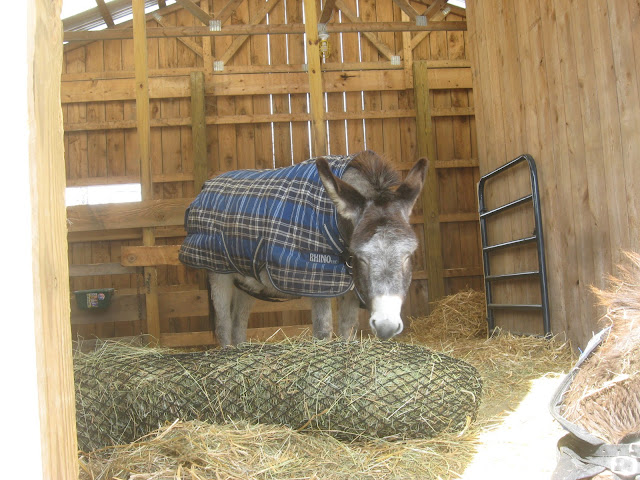 It makes a fun toy to toss around as well. 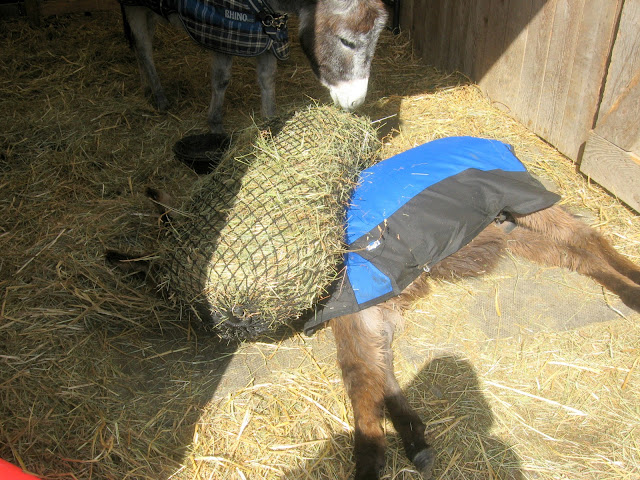 The only trouble I have had with it is that the drawstring proved to be irresistible when it was just tucked into the filled net.  If the donkeys could see it inside the net, they would pull it out and chew on it. 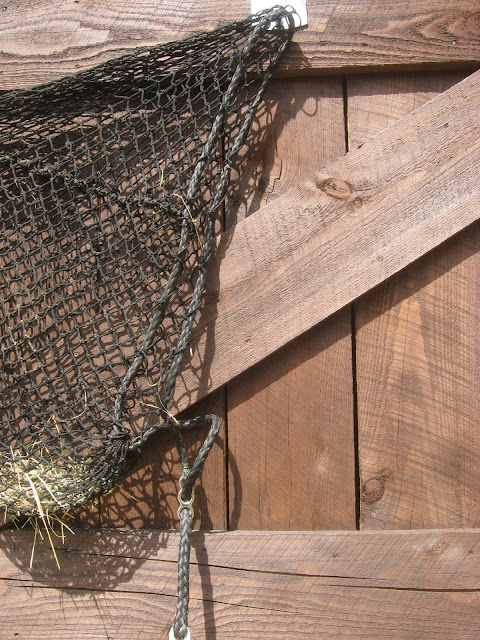 The solution to this proved to be fairly simple.  After putting a bale in the net, I made a hole in the hay and fed the string into the hole where the donkeys would never see it.  Problem solved. 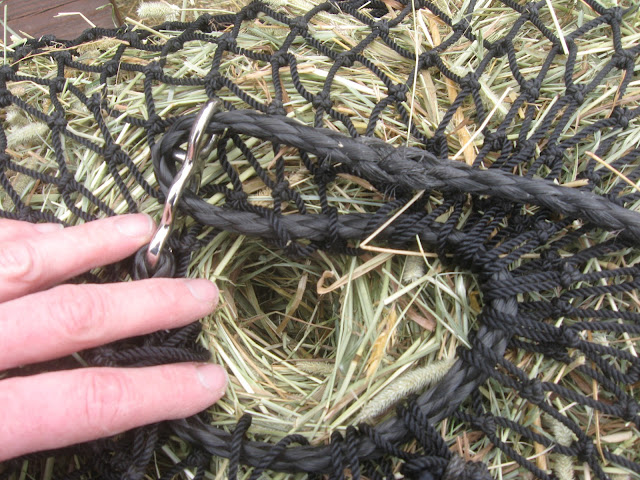 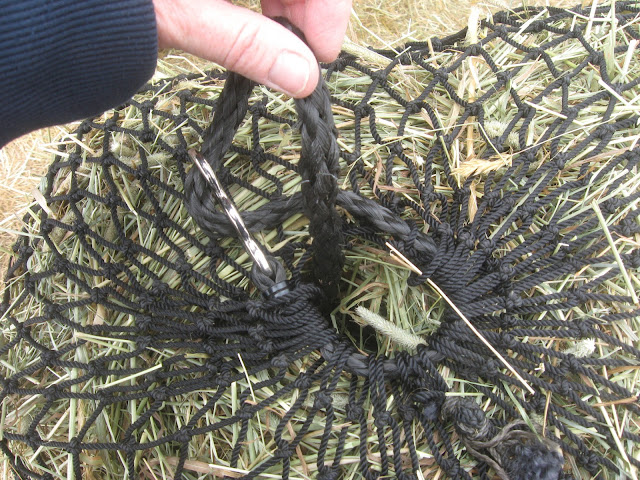 The closed and hidden drawstring... 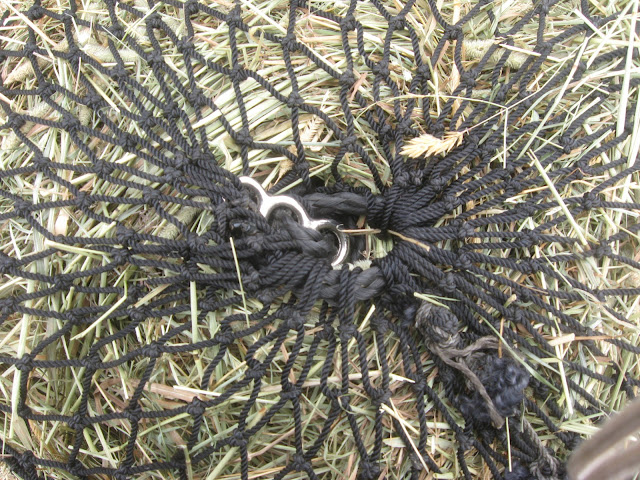 If you are wondering about my slow-feed hay boxes, I still use them as well, but I usually put the net inside the box.  I like the netting better then the metal grate I originally used.  It slows them down more and can't get hung up and stuck, which happens occasionally with the grate.   I like the box to keep the nets out of the mud though.  You can buy this netting by the foot and I think I am going to replace the metal grates in my boxes with net stretched in a wooden frame.  That will be the best of both worlds I  think.  It will be far easier to fill than the nets and hold more hay, which means less work and less allergies for me.  I will still use the nets as well though, for feeding inside when the weather is really bad.

It is good to have a variety of slow feeding options since different conditions and different hay call for it.  Coarse, low nutrient hay or animals with high nutritional needs should have 1.5 - 2 inch openings (depending on the size of  the feet involved).  Fat stinking hogs (Gabe!) eating high quality hay, do well with the extremely small holes once they are familiar with net-nibbling.  The animals have to be allowed to adjust to the nets slowly.  Once they make that adjustment though, they are much happier than with any other winter feeding system I have ever seen.  This is the closest to natural grazing that is possible during the winter here.  I also did not waste one single bite of hay this year.  All in all, this combination seems to cover most of the bases and worked well for me.  I hope that some of you find this helpful.
Posted by The Dancing Donkey at 11:55 PM